Luis Sa Silva has secured a seat with Carlin in this year’s GP3 Series season.

The 22-year-old Angolan makes the switch from the F3 Euro Series, where he drove a car run by Prema Powerteam last year, finishing 14th in the standings as the last of the full-time entries.

In 2011 he finished runner-up to the then-14-year-old Matheo Tuscher in the Formula Pilota China series with two wins to Tuscher?s eight. There Sa Silva also raced against Eric Lichtenstein, his new teammate at Carlin in GP3.

?GP3, particularly with the introduction of the new generation car has become a real stepping stone to the top level of motorsport,? said Sa Silva. ?With 400bhp the GP3 car will be a real step up and there will be a lot to learn.

?I am so excited to race against some of the best drivers in Europe on the F1 package and represent Angola to the best of my abilities and I know that with Carlin I have a great package with which to do that.?

Team boss Trevor Carlin added: ?Luis is a very welcome addition to our team and we?re delighted with how he?s interacted with the team already. It?s very exciting to be involved with a project such as the Angolan Driver Development Programme, in that we?re working with a country that hasn?t traditionally had a strong motorsport history before.

?The GP3 car is going to be quite a step up from F3 in terms of power this year, but we?re giving Luis all the tools he needs to be able to make the most of this fantastic opportunity.?

Carlin are expected to reveal the identity of their third driver before next week?s opening pre-season test at Estoril. 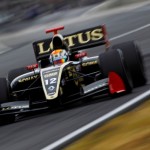