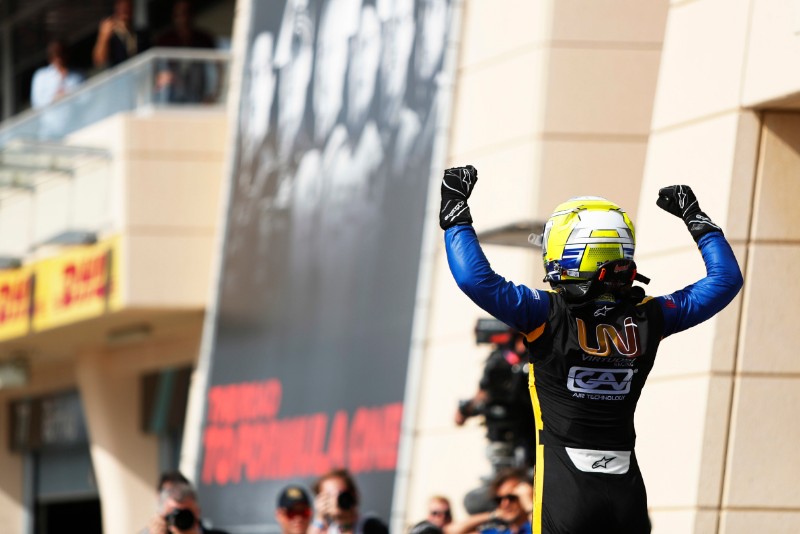 UNI-Virtuosi driver Ghiotto pitted early in the second half of the race, dropping out of the top 10 but charging his way back up the order and taking the lead from DAMS’ Sergio Sette Camara down the inside of Turn 13 with three laps to go.

The trio survived major damage, but all dropped way down the order , and allowed poleman Mick Schumacher and Ghiotto to pull away at the front. Ghiotto wasted little time in dispatching Prema driver Schumacher, with a tidy move down the inside of Turn 1 on the third lap.

The DAMS duo of Sette Camara and Nicholas Latifi were also able to overcome Schumacher, and inherited the lead when Ghiotto made a non-mandatory pitstop. Feature race winner Nicholas Latifi closed to within tenths of his team-mate but was unable to find a way past.

Ghiotto’s pace was electric thereon and he closed down a gap of over 20 seconds in less than 10 laps, with Sette Camara unable to put up a fight. It marks the first win for the new UNI-Virtuosi team since it bought the assets of Russian Time’s entry.

By the end, Ghiotto’s lead was 5.474 seconds over Sette Camara. Third place for Latifi means he loses the championship lead to Ghiotto, with two points splitting the pair

Guan Yu Zhou deferred from his team-mate’s winning strategy and didn’t make a pitstop, but was an impressive fourth at the chequered flag after starting the race in 10th. The top five was completed by Deletraz, the same place he finished the feature race in.

Schumacher slumped to sixth, beating the resurgent de Vries, The Dutchman also made a pitstop, setting fastest lap on the way, but made less progress after his stop.