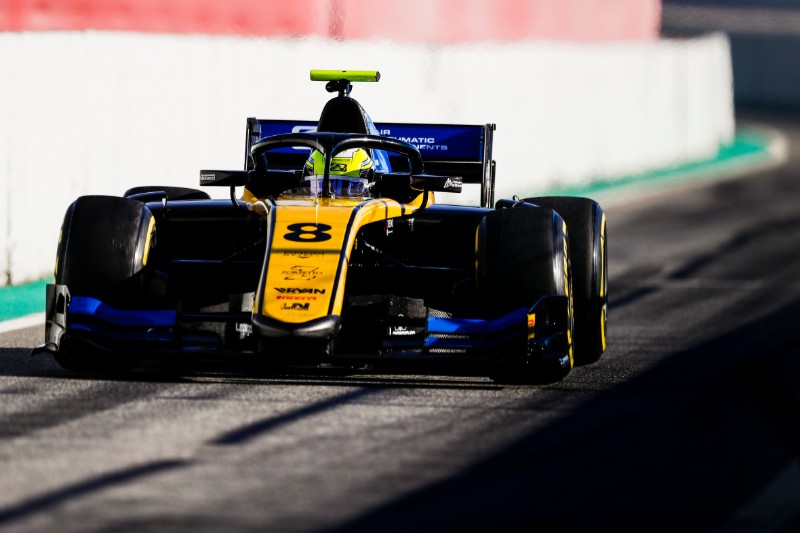 Luca Ghiotto was comfortably fastest in free practice for the third Formula 2 round of the season at Barcelona.

The Virtuosi Racing driver ended up 0.404 seconds clear of championship leader Nicholas Latifi at the top of the timesheet, after having been the first driver to dip into the 1m29s.

Ghiotto managed two laps good enough to claim top spot and as DAMS’ Latifi edged to within 0.3s of the Italian’s first benchmark, the pacesetter lowered his time to an unassailable 1m29.462s.

These times were set after a red flag delayed the qualifying simulation runs, when Sauber Junior Team member Juan Manuel Correa looped his Charouz Racing System-ran car at the final corner and ended up beached in the gravel.

Latifi, who was blocked at the chicane by MP Motorsport’s Mahaveer Raghunathan on his first run prior to the red flag, ended up only narrowly ahead of third-placed Sean Gelael on the final timesheet.

Prema driver Gelael built up to his personal best with several early laps, demoting Ghiotto’s team-mate Guan Yu Zhou to an eventual fourth place. Unlike Gelael, Zhou vaulted straight to his provisional third place on his first timed lap after the start of his session was delayed with work being done to his car.

Carlin suffered a mixed session, with Nobuharu Matsushita ending up seventh while Louis Deletraz occupied 16th after only managing to complete seven laps and losing all of his race simulation running to a technical gremlin.

Trident’s Ralph Boschung suffered a huge snap of oversteer on the exit of the high-speed right-hander Turn 9. The Swiss scooped up the spectacular slide and ended the session with his car intact and in 11th place.

While his team-mate Correa’s session ended after just three laps, Callum Ilott managed 19 en route to 12th on the timesheet.