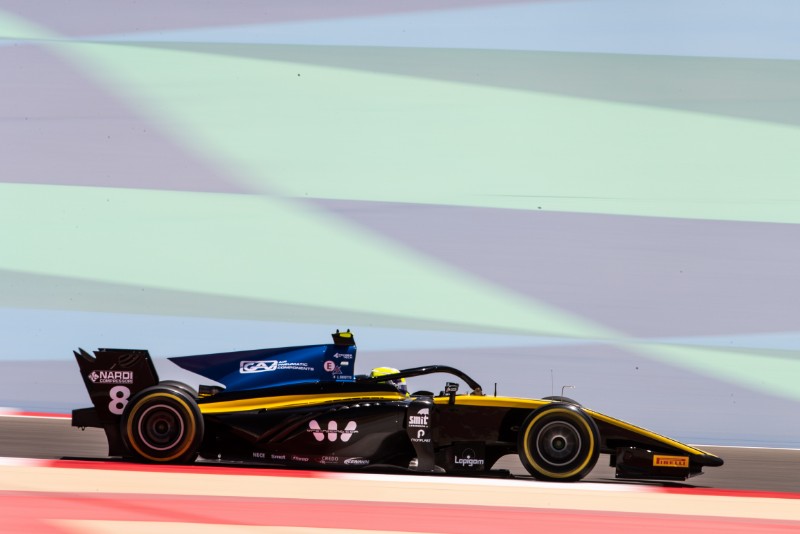 Luca Ghiotto earned his maiden Formula 2 pole position in the 2019 season opener in Bahrain with a stunning late-lap for the new-look Virtuosi team.

Ghiotto posted a 1m40.504s in the dying moments of the session for Russian Time’s successor to deny new Carlin recruit Louis Deletraz – who also earned his best ever qualifying position – his maiden pole by over three tenths.

Latifi was leading a DAMS one-two after the opening qualifying runs, until Callum Ilott binned his Sauber Junior Team-run car into the wall, bringing out the red flag – exclaiming “I’m such an idiot” over the radio.

After the short session stoppage, both DAMS drivers were among those who went for their second run immediately. Latifi was able to better his time, while his team-mate and practice pacesetter Sergio Sette Camara fell to third place after an improved lap from Campos’ Jack Aitken.

Ghiotto and the rest of the drivers then set their second hot laps, and Latifi, who has never previously qualified higher than 13th in Bahrain,? fell to fourth ahead of Aitken.

Series returnee Nobuharu Matsushita was sixth quickest for Carlin ahead of Sean Gelael, who upstaged headline rookie Mick Schumacher to be the lead Prema driver.

With other drivers improving, Sette Camara fell to eighth place ahead of Ralph Boschung and quickest debutant Schumacher.

They were followed by a trio of fellow rookies led by GP3 champion Anthoine Hubert, who beat his former GP3 adversaries Juan Manuel Correa and Nikita Mazepin.

Jordan King was 14th on his series return with MP Motorsport, ahead of Ferrari junior?Giuliano Alesi, the second Campos of Dorian Boccolacci and Ghiotto’s team-mate Guanyu Zhou, who was 17th quickest in his maiden F2 qualifying session.

After his incident, Ilott ended up 18th, only faster than rookies Tatiana Calderon and Mahaveer Raghunathan, the latter of which had a trip through the gravel on the exit of Turn 3 at the end of the session.