Lindh wins IP2000 finale after Frost off, Kirkwood taken out after sealing title 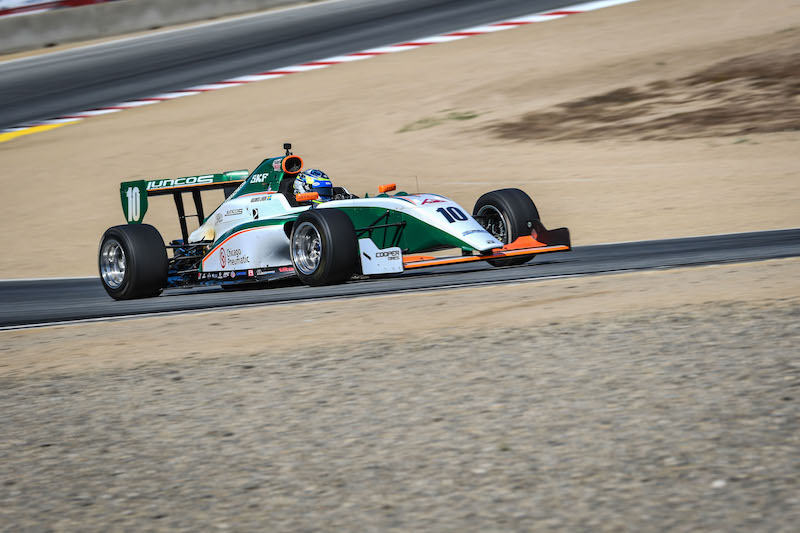 Rasmus Lindh won the Indy Pro 2000 finale at Laguna Seca after Danial Frost crashed out of the lead, while Kyle Kirkwood was eliminated moments after he secured the title.

With his race one win having given him a 28-point lead over rival Lindh, simply taking the green flag was enough to guarantee Kirkwood the title, but his race would end just a few hundred metres later.

Heading into Turn 2 alongside pole-sitter Lindh, Kirkwood was hit from behind by his RP Motorsport team-mate Artem Petrov, who had lost control after contact with second-row starters Sting Ray Robb and Frost.

While both RP cars were stranded in the gravel trap and Robb had to pit under caution with damage, Frost appeared to escape unharmed, and took the lead away from Lindh on lap six.

The Exclusive Autosport driver seemed comfortable when on lap 14 of 25 he suddenly went off at Turn 9 – the left-hander following the Corkscrew – potentially due to a mechanical issue, and made contact with the tyre barrier, coming to a halt when he returned to the track.

Lindh led once again for Juncos Racing after the restart, although his winning margin was just eight tenths of a second over Parker Thompson, who came from 10th on the grid to finish second.

Abel Motorsports driver Thompson got past the DEForce duo of Moises de la Vara and Kory Enders after the second restart, although Enders put up a valiant defence of second en route to his second podium of the season.