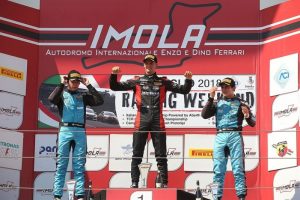 A fourth win of the season for Leonardo Lorandi at Imola has put the Bhaitech driver back in the lead of the Italian Formula 4 Championship.

A strong start immediately put Lorandi on the tail of the poleman, while Fittipaldi also got passed by Malvestiti’s team-mate Giorgio Carrara after a failed return move on Lorandi.

It took four laps before Lorandi could get past Malvesititi, and once ahead he looked in control.

In the closing laps of the race a safety car was required due to an incident involving Mucke Motorsport’s Ido Cohen and Jenzer’s Oliver Rasmussen. There were two minutes left of the race when the safety car left, and Lorandi was able to put 1.291 seconds between himself and Malvestiti in the time remaining.

Carrara just held off Fittipaldi, who is now 12 points behind Lorandi in the standings.