Leimer beats Bird to both Monza win and points lead 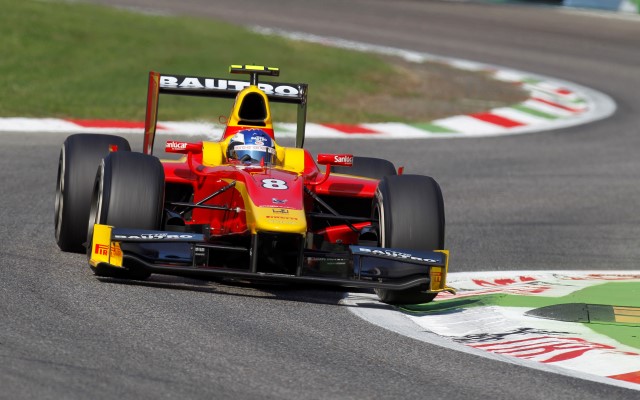 Fabio Leimer defeated the challenge of Sam Bird to beat the Briton to both victory in the Monza GP2 feature race and the series lead.

Bird started from pole with Leimer but the Swiss driver got the better launch to lead into the first corner. He stopped a third of the way into the race to switch from the option tyres the started to a set of primes.

Bird started on primes so stayed out longer and set a strong pace out front. Any chance of holding onto the lead at his stop however was wrecked by a slow rear-right tyre change. On his fresh options he set about reeling in Leimer over the final third of the race, with the championship lead at stake between the pair as a result of issues for erstwhile points leaders Stefano Coletti and Felipe Nasr.

It was Leimer who held on to take the win and the lead of the standings, 0.8 seconds and eight points ahead of Bird who lost only one point relative to his rival by claiming the two bonus points for fastest lap.

Bird’s Russian Time team-mate Tom Dillmann ran a similar prime-option strategy from fifth on the grid to claim third at the flag, a result that moved the rookie squad into the teams’ championship lead at the expense of Carlin who suffered a double retirement with Nasr and Jolyon Palmer.

Palmer started third but his race came undone with a tyre that wasn’t fitted properly at his pitstop, forcing him to stop out on track. That had followed another botched stop for his team-mate Nasr, but his retirement was forced by a mechanical issue.

Coletti meanwhile ran fifth until his pitstop, where he first failed to slow down in time for the pitlane speed limit line and then suffered a delayed stop. Having served a drive-through penalty for his misdemeanour he was fighting back up the order when he pulled into the pits and retired. Another leading contender Marcus Ericsson was lost to a failure on his rear-right corner.

Late stoppers Stephane Richelmi and Julian Leal capitalised on those dramas to come home in fourth and fifth. James Calado fell down the order when he ran deep at the second chicane on the first lap but came back to finish sixth ahead of Adrian Quaife-Hobbs and Alexander Rossi, who will share the front row for Sunday’s sprint race.

Sergio Canamasas finally scored his first GP2 points in ninth but only after a fraught battle with fellow regular offender Johnny Cecotto that is under investigation. Another new scorer Vittorio Ghirelli was tenth.