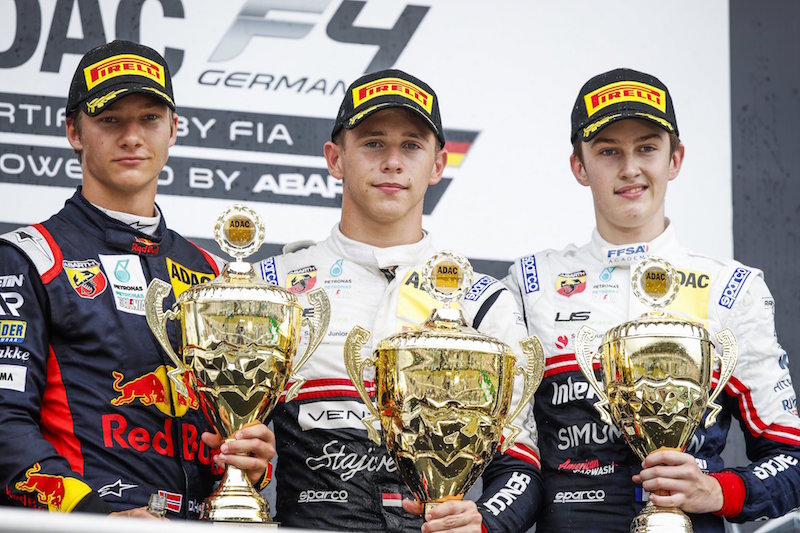 Arthur Leclerc took his first ADAC Formula 4 win in the warm-up race to the German Grand Prix at Hockenheim.

The Monegasque teenager, whose brother Charles races for Scuderia Ferrari in Formula 1, lost his pole advantage off the line to title rival Dennis Hauger, but caught the Van Amersfoort Racing driver off-guard at Turn 2 a lap later and reclaimed the lead.

Although he was kept under pressure through the rest of the race, Sauber junior Leclerc never looked like losing his lead.

Leclerc’s title-leading US Racing – CHRS team-mate Theo Pourchaire had a relatively quiet run to third after establishing himself in the position during an early tussle, and was well clear of the battling for fourth and below despite two safety car periods.

The first one was caused by a backmarker collision that involved three cars, while the second time around it was down to Mikhael Belov spinning out of the points and beaching himself.

After several to-and-fros between the trio, Prema’s Gianluca Petecof ended up beating US Racing pair Roman Stanek and Alessandro Ghiretti to fourth,? with Nicklas Krutten taking seventh for VAR after tripping over himself when he got involved in the battle ahead.

Ido Cohen had finished fourth on the road for VAR, but was relegated to last by a 30-second penalty.