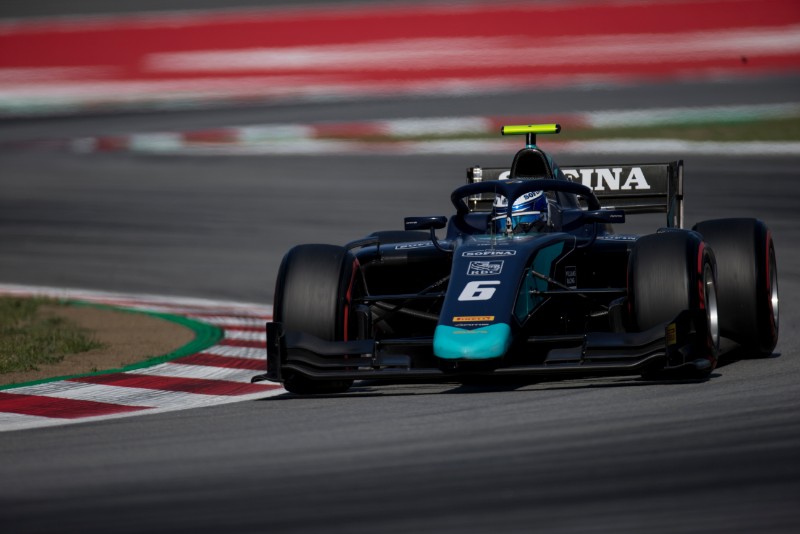 DAMS? Nicholas Latifi secured his third Formula 2 win of the season with a battling drive at Barcelona to extend his points lead and deny rookie Guanyu Zhou victory.

Williams Formula 1 reserve Latifi started second and was there after the opening lap, overtaking poleman Luca Ghiotto but losing out to Renault junior Zhou.

Running the conventional strategy of starting on soft tyres and pitting for mediums, Latifi held station behind Zhou?s car for the majority of the race.?However, he picked up his pace with 10 laps to go, and passed the Virtuosi Racing driver on lap 30 of 37.

Once the alternate strategy drivers all stopped, Latifi was left out in front to finish ahead of Campos Racing?s Jack Aitken – who passed Zhou late on for second – by 1.9 seconds.

Aitken started the race eighth and was fourth by the end of the first lap ? before making his way past former McLaren junior Nyck de Vries on lap six. The pair battled for a number of laps before Aitken made more progress on the medium tyres.

Zhou came home in third, his first F2 podium, ahead of Virtuosi team-mate Ghiotto. The poleman’s?tardy start was only compounded when he was punted by Dorian Boccolacci on the opening lap, giving Ghiotto a puncture.

While Ghiotto was able to close up to the pack behind a safety car for incidents at Turn 4 involving Mick Schumacher, Nobuharu Matsushita and Giuliano Alesi, he was still some 15s behind the pack on the restart.

Ghiotto?s pace throughout the race was among the fastest throughout, and he recovered to take a very well-earned fourth place to limit the damage in the championship. De Vries finished fifth, ahead of the highest-placed runner on the alternate strategy ? Arden?s Anthoine Hubert.

Hubert started a lowly 15th, and passed highest-placed medium tyre starter Ralph Boschung of Trident late on, having stayed on the circuit until lap 32 and emerged just outside of the points.

He also battled hard with MP Motorsport?s Jordan King, who finished less than two seconds behind in seventh.

Sauber Junior Team by Charouz?s Callum Ilott secured his first F2 points and sprint race pole with eighth, after dropping through the order slightly in the race.

Prema?s Sean Gelael and Boschung ? the latter failing to make an impression on the softer tyres after leading the race early on ? rounded out the points.

Schumacher had a difficult day. He was hit by Matsushita on the opening lap, which gave him a puncture. He then had to pit again after hitting Baku podium finisher Juan Manuel Correa.

Latifi’s DAMS team-mate Sergio Sette Camara had a disaster of a race. He dropped well down the order at the start, had a slow pitstop, had a speeding penalty, hit a bollard and trailed home nine laps down.