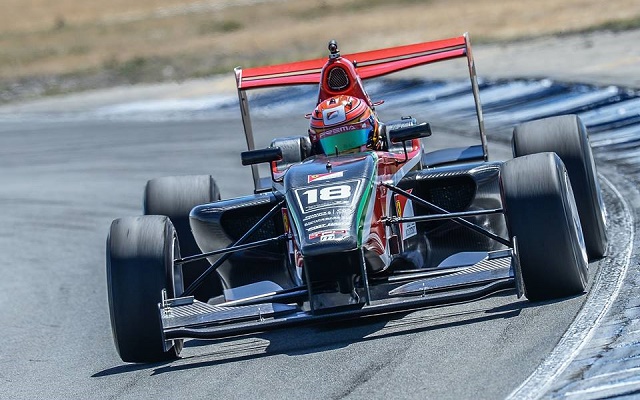 The Canadian was within the top three in each of the sessions and claimed the top spot for the day with a benchmark lap in second practice.

In session one, Giles driver Sam MacLeod led early on, but his teammate Santino Ferrucci would go on to take first. A red flag for Jamie Conroy ended the 30-minute practice early, leaving the American as the quickest driver.

Maini became the first driver this weekend to go below a minute early in session two, but was soon deposed by Maisano.

Stroll then went to the top, and, while Maini improved at the last second, the Ferrari junior retook the lead after the checkered flag.

The Indian settled for second, with Maisano rounding out an all-M2 top three. Randle was fourth again, leading teammate Ilott and Brendon Leitch.

Munro in seventh was narrowly ahead of Eastwood and Nikita Mazepin, while Alfonso Celis was tenth.

Stefan Riener led the early stages of the final session when it was red-flagged due to a crash for Munro. The lead changed hands numerous times after the subsequent restart, eventually ending up with Maini in the final five minutes.

The Indian continued to improve and narrowly escaped with first, despite quick laps from runner-up MacLeod and third-placed Stroll.

Kristensen was fourth, with Ilott on an identical time and Maisano just 0.002s behind.