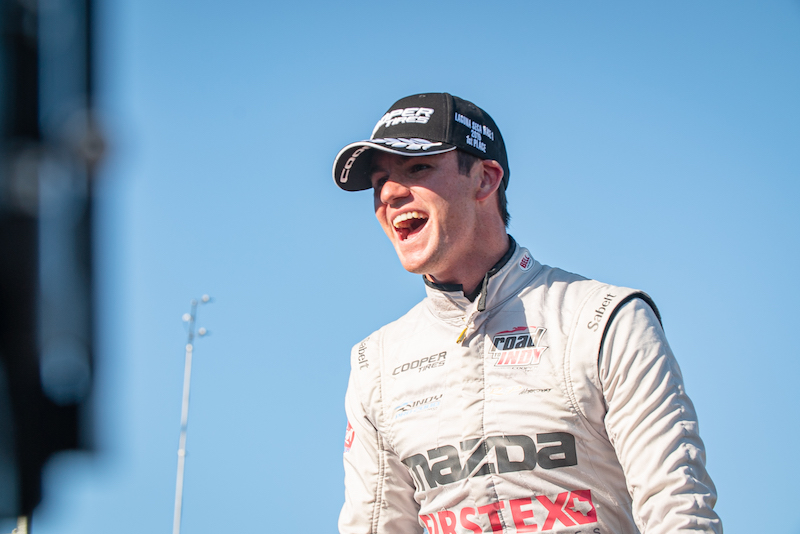 Andretti Autosport has called up its Indy Lights driver Kyle Kirkwood to race in IndyCar’s new Esports series while circuit racing is off.

Reigning Indy Pro 2000 champion Kirkwood, who also has titles in Formula Regional Americas, USF2000 and United States Formula 4, is making the step up to Indy Lights this year but will now ‘race’ in IndyCar before he makes his Lights debut.

“I didn’t realise how serious everyone was taking it,” Kirkwood said of his first test appearance in the virtual Indy car. “So I actually ended up spending 12pm to 11pm running iRacing just to try to catch up with everybody.”

The IndyCar iRacing Challenge starts this weekend on the iRacing simulator programme at Watkins Glen, a circuit which IndyCar last raced at in 2017 and was chosen via an online public poll.

The series is a substitute for real racing after several IndyCar rounds were postponed and cancelled in response to the global COVID-19 pandemic.

A grid of 22 of the current IndyCar drivers feature, with Kirkwood and ex-Formula 1 racer and three-time American rallycross champion Scott Speed replacing Ryan Hunter-Reay and Marco Andretti at Andretti, and Juncos Racing returning to the series with its longtime driver Kyle Kaiser. Kirkwood is expected to appear in all of the races.

Several other drivers will be making their IndyCar ‘debut’, most notably Carlin’s Felipe Nasr. The Brazilian’s deal with the British team was only for the Grand Prix of St. Petersburg, which was cancelled mid-weekend two weeks ago.

Races at Barber Motorsports Park and Circuit of the Americas will take place on April 4 and 25, with the competing drivers choosing a circuit from the IndyCar calendar for April 11’s race, and another public poll on non-IndyCar tracks choosing the location for the May 2 finale.

Each event will be broadcast via IndyCar’s online platforms and iRacing’s official Twitch channel, and will include a 10-minute qualifying session that sets the grid for the race. All cars will have identical set-ups. There will be no prize money for the series, with IndyCar donating money to charity instead.

The supporting Road to Indy has started its own Esports series, which will run partly in tandem with IndyCar’s competition.