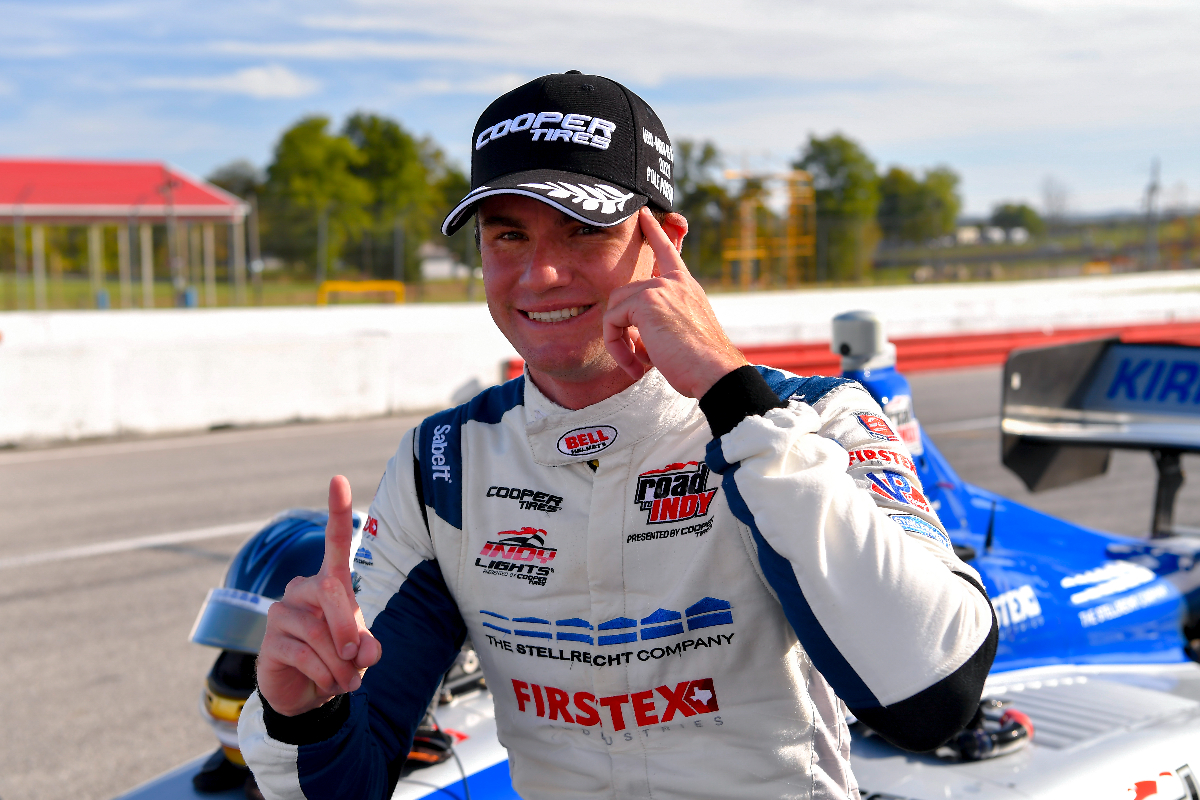 Indy Lights champion Kyle Kirkwood will graduate up to IndyCar next year with a full-time seat at AJ Foyt Racing.

The 23-year-old was guaranteed a series debut and an Indianapolis 500 seat in 2022 with the scholarship he recieved for winning this year’s Indy Lights title, and was initially contracted to Andretti Autosport for his racing future.

However the team couldn’t find a place in its IndyCar line-up for Kirkwood, nor did it move to put him in its Formula E squad as envisiged at one point, and so he became free to sign for a different outfit in IndyCar.

“It’s hard to explain in words the excitement I have to drive for such an experienced and legendary team,” Kirkwood said of joining AJ Foyt.

“I know I will be filling some very big shoes, but I think it’s the perfect timing and group to be able to do so.”

The Floridian will drive the team’s #14 car, which was previously raced by four-time IndyCar champion Sebastien Bourdais.

“Considering I have 19 years of experience driving, and it’s all led to this moment to becoming a full-time Indycar driver — It’s truly a dream come true. It’s incredible seeing the completely unexpected path I took in previous years blossom into something I’ve always hoped for as a kid in karting.”

Kirkwood has done three IndyCar tests so far, none of which were on ovals, and his first experience of the car actually came with Andretti.

“What I’ve learned in my three Indy car tests is that the Indy Lights car and the Indycar are not massively different,” said Kirkwood.

“As we’ve seen with many drivers, it’s quite an easy transition. The best thing that you can take away from the Road to Indy is the track experience. With minimal time during weekends, it’s crucial to maximize practice, having the track experience eliminates a period of time spent learning so you can solely focus on the car and driving.

“The biggest difference I’ve noticed in my tests is the tire. The Firestone tire creates a lot more grip. There are other differences, like steering weight, downforce and braking capabilities, but all of those are just a nice step forward from the Indy Lights car.”

AJ Foyt plans to have a second full-time car in 2022, which Bourdais is targeting to occupy as he tries to stay in IndyCar.

“We are thrilled to welcome Kyle to the team,” said the team’s president Larry Foyt.

“Obviously, he has been very successful on his climb through the Road to Indy championships and his record speaks for itself. This deal came together rather quickly, but I’ve already been impressed with how Kyle thinks about racing and the maturity he seems to have for such a young driver.”