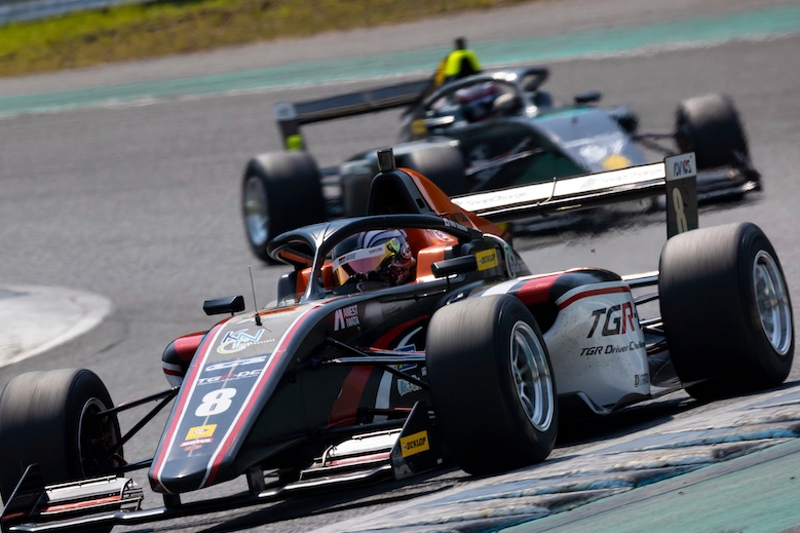 Miki Koyama was the most consistent performer in an up-and-down weekend for many drivers in the fourth round of the Formula Regional Japan season at Sportsland SUGO.

Sota Ogawa won race one from pole, and TOM’S driver Kazuki Oki made a better start from third to pass Koyama for second off the line but gave up his position when he served a drive-through penalty at the end of lap six of 22.

Koyama was four seconds back from Ogawa when she got back into second, but she gradually closed down that gap through the race and finished 1.181s behind.

“Hirobon” put up with pressure from the fast-starting Yoshiaki Katayama for a long time to claim third, and similarly Takashi Hata had Riki Okusa in his mirrors the whole distance on the way to fifth. After his penalty, Oki finished eighth.

Oki started on pole for race two and raced away at the start from Koyama and Ogawa.

Katayama got himself to the front of the midfield pack within a lap once again after starting eighth, and by lap four had brought himself into the fight with the podium runners as the fastest driver on track.

Koyama, Ogawa and Katayama ran line astern until lap 13 when Ogawa finally tried making a pass on Koyama. He had no luck in several places but got it done late in the lap. He then gapped the two behind and started cutting into Oki’s lead until lap 17 when he was close enough to dive down Oki’s inside at turn one.

The pair spent the next two corners going side-by-side, and Ogawa was still applying the pressure until what looked like potential contact as he suddenly dropped off by 10s in the remainder of the lap and then retired.

Koyama had a lights-to-flag success in race three to extend her points lead, and Ogawa was runner-up after passing Oki on the run to the first corner.

It was a bad race for Oki, who gradually slipped back over the race and eventually finished 50.045s back in seventh place. Okusa passed him for third in the first third of the race and held on to that position, having started last, and Katayama went from eighth to fourth.