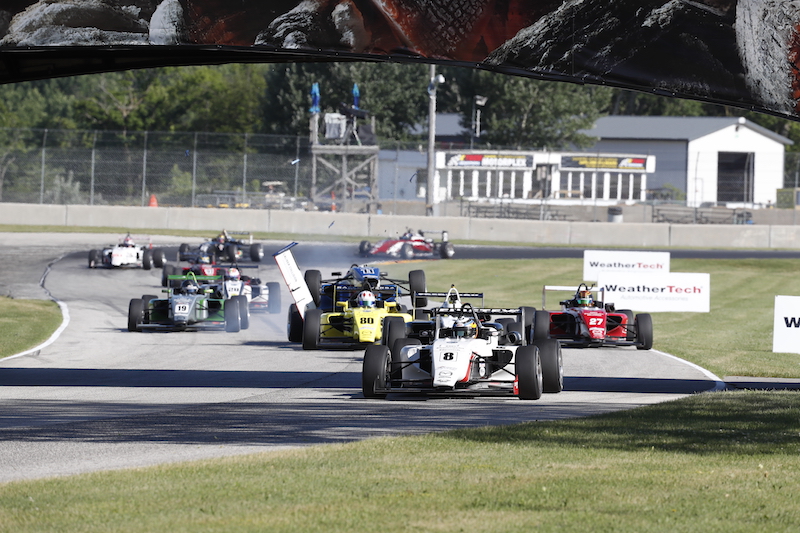 Kyle Kirkwood won both USF2000 races at Road America in spite of on-track chaos, and now has a 96 point lead over Alex Baron at the top of the championship.

Kirkwood passed Swedish rookie Rasmus Lindh on the outside shortly after the start of race one and kept his lead and his head to win.

Kaylen Frederick was second, capitalising on a mistake by Lindh at about half distance and then the first of two safety car periods, which allowed him to keep Kirkwood in sight. Lindh dropped to fifth but fought back to fourth place, passing Kory Enders who was struggling for grip.

Irish MRTI Shootout winner Keith Donegan was third after a brave and confident performance. He qualified tenth but it only took him two laps to work his way up to fourth. He also took advantage of Lindh?s slip and sneaked on to the podium late in the race.

The inexperienced Sabre Cook was at the centre of both safety car incidents. She spun off at Carousel on her fifth lap and had to be recovered from the gravel trap. She was able to get back to the pits and then rejoin, but had a more serious spin later on and hit the wall on the outside of Turns 7 and 8. The full-course yellows that ensued lasted until the end of the race.

Cook was not the only retirement. Exclusive Autosport?s Manuel Cabrera lost a front wing, which severed a brake pipe.

The second race was even scrappier than the first. There were three safety car periods in the 12-lap race and only 14 cars from 26 finished.

Kirkwood won a single-lap green flag dash at the end of the race, passing Brazilian Lucas Kohl. Frederick was second; Kohl ran wide after Kirkwood?s attack and Frederick nipped through.

Lindh was unable to convert his pole position into a win yet again. He was passed by Kohl on the second lap, then much later he was the catalyst for a lengthy safety car period four laps from the end. He lost it at Turn 5 and drove straight into the gravel trap, wrong-footing Enders and Calvin Ming who then collided trying to defend from each other. All three retired.

Earlier, Kyle Dupell and Darren Keane took each other into the gravel outside Turn 12. Dupell?s car rolled. Jose Sierra and Max Peichel had a similar collision at the very start of the second lap and four other cars had to pit as a result.

Colin Kaminsky was able to benefit from the chaos, finishing a season?s best fourth by keeping out of trouble. Igor Fraga was fifth despite having to pit during the first safety car period.

Singaporean Danial Frost, a regular in Asian championships, made his championship debut with Exclusive Autosport, finishing 19th in the first race and retiring from the second.