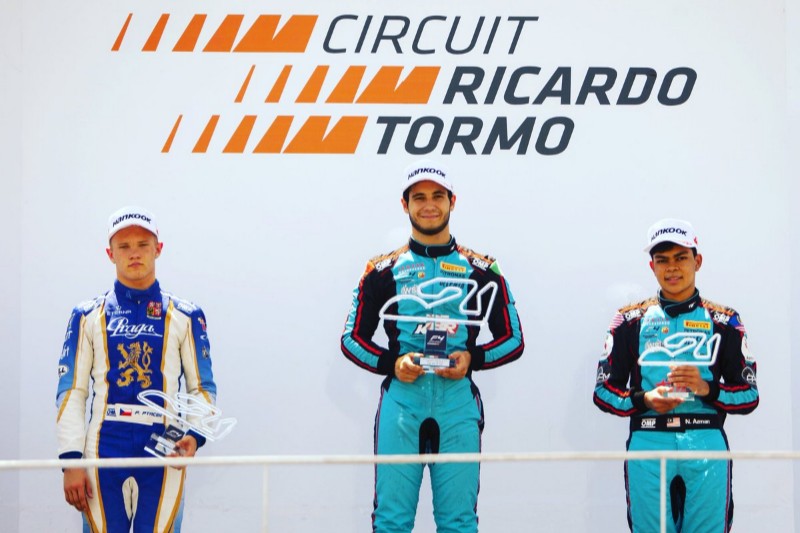 He made his championship return with the team, taking third in qualifying behind Petr Ptacek, of the circuit-based Praga F4 team, and MP Motorsport’s Amaury Cordeel.

Cordeel started from the front for the first race, but a stall for him and a blundered jumped start for Ptacek meant Gonzalez was into the lead by the first corner, and he stayed there for the remainder of the race.

Cordeel finished second, ahead of Gonzalez’s team-mate Nazim Azman, and MP’s Patrick Schott and Laszlo Toth, another Italian F4 regular making an appearance in the championship.

Ptacek served a drive-through penalty for his starting woes, and then retired from the race on lap 11 of 19.

Gonzalez made it two wins out of two in the second race, with team-mate Azman finishing third once again. This time Ptacek’s race went to plan and he finished in second place, matching the result he achieved twice at last weekend’s Italian F4 round at Misano.

Having extended his championship lead in the first race thanks to the absense of MP’s Isaac Blomqvist, fourth place in second race saw it reduced by two points as Azman moved into second in the standings.

Ptacek went one better in the final race of the weekend, taking both the win and fastest lap from pole and moving into fourth in the standings.

Gonzalez finished 3.630 seconds back in second, putting him third in the standings, with Cordeel completing the podium and also doing enough to move into the top five in the standings.

Azman finished fourth, and is now four points off the championship lead after Pujeu retired.