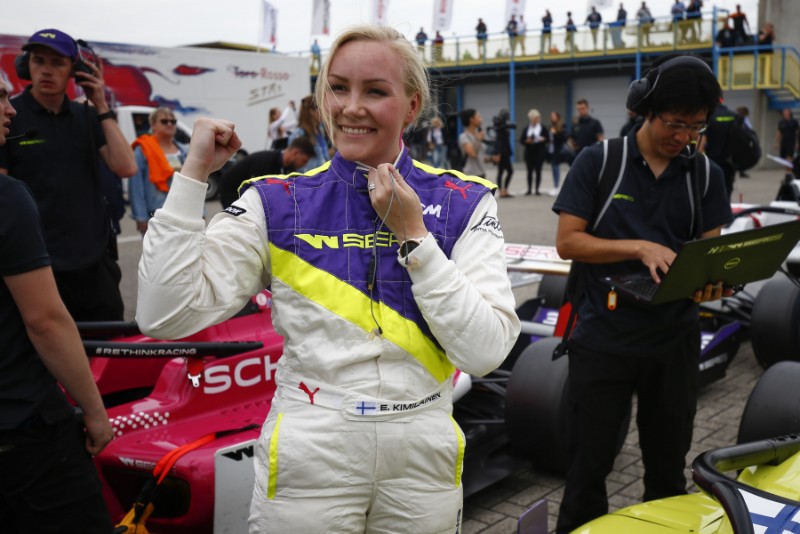 Emma Kimilainen took her first W Series win at Assen, as the title fight was reduced to a two-horse race.

Strong starts from Alice Powell and Jamie Chadwick meant Kimilainen was under pressure from pole, and she lost the lead to Powell at Turn 2.

The race was neutralised immediately after when a spinning Tasmin Pepper kept the throttle open and moved into the path of Miki Koyama. Pepper was able to return to the pits, while Koyama was taken by the medical car from the scene.

It took several laps until after the safety car restart for racing action to take place, with Kimilainen starting to pressure Powell for the lead.

On lap 12 of 19, Kimilainen was directly behind Powell going into Turn 1. The leader went wide on the exit of the corner, hitting one of the large sausage kerbs, and lost first place going into Turn 2.

From that point on Kimilianen was unstoppable, setting multiple fastest laps and pulling out a 5.767 second gap over Powell to claim her first victory.

The fight for third place was an important one in terms of the title battle, as championship leader Jamie Chadwick held off Beitske Visser to extend her lead to 13 points.

Norisring winner Marta Garcia was unable to climb up the order from ninth on the grid, while Fabienne Wohlwend had to pit for a new front wing after rearending Gosia Rdest through the final corner and finished way out of the points. Both are now out of title contention.

Australian Caitlin Wood turned her fifth place on the grid into fifth in the race, marking her second points finish and best result of the season so far. Rdest survived the Wohlwend contact to finish sixth, ahead of Jessica Hawkins and Vicky Piria, whose car briefly set on fire during qualifying due to a oil-related problem.