Kiern Jewiss on top in British F4 Thruxton race one 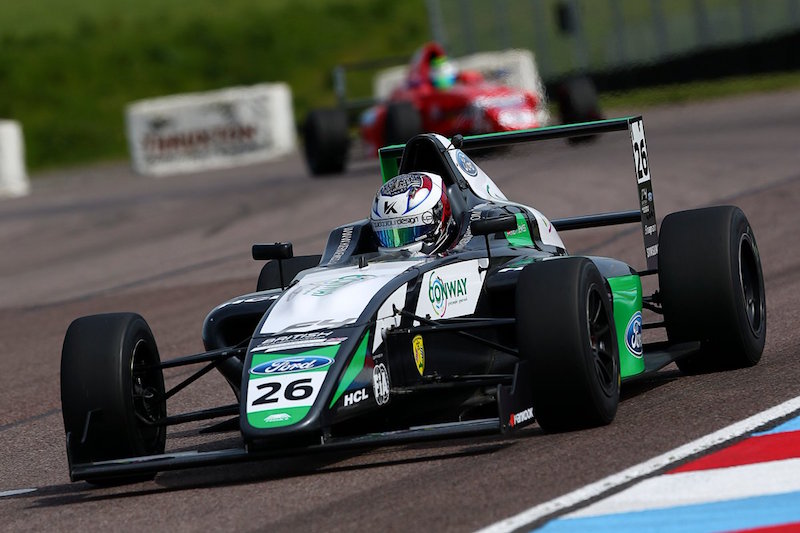 Kiren Jewiss won the opening British Formula 4 race of the weekend after a tough battle with Dennis Hauger and Jonathan Hoggard.

Hoggard launched into the race lead off the line, leaving Jewiss and Hauger to battle for the runner up position.

The pair ran side by side on a number of occasions but never lost sight of Hoggard and it wasn?t long before the race leader was drawn into the battle.

The trio scrapped for the top position, with Jewiss eventually coming out on top.

Hoggard, who had dropped to third, turned from attack to defence as he tried to keep Paavo Tonteri behind him, allowing the top two to escape up the road.

Hoggard and Tonteri were joined by Ayrton Simmons, who was on an impressive recovery drive from the back end of the grid.

The Fortec Motorsport driver eventually dropped back down the order, but Tonteri and Simmons were able to close the gap to the lead fight, promising a four-way battle for the race lead in the closing stages.

Jewiss and Hauger swapped places twice before contact on the final lap sent Hauger into the barrier and out of the race.

The Double R Racing driver finished 1.049s ahead of Simmons to take his second victory of the season.

Tonteri took third ahead of Jack Doohan, who had made a poor start from the front row of the grid.

Hoggard eventually dropped back to sixth, behind Patrik Pasma.

The race started with drama for Manuel Sulaiman, who struggled to get off the grid and was collected by a number of drivers behind him. The JHR Developments driver, Sebastian Alvarez, Hampus Ericsson and Sebastian Priaulx were all forced to pit, though the latter two managed to return to the track.