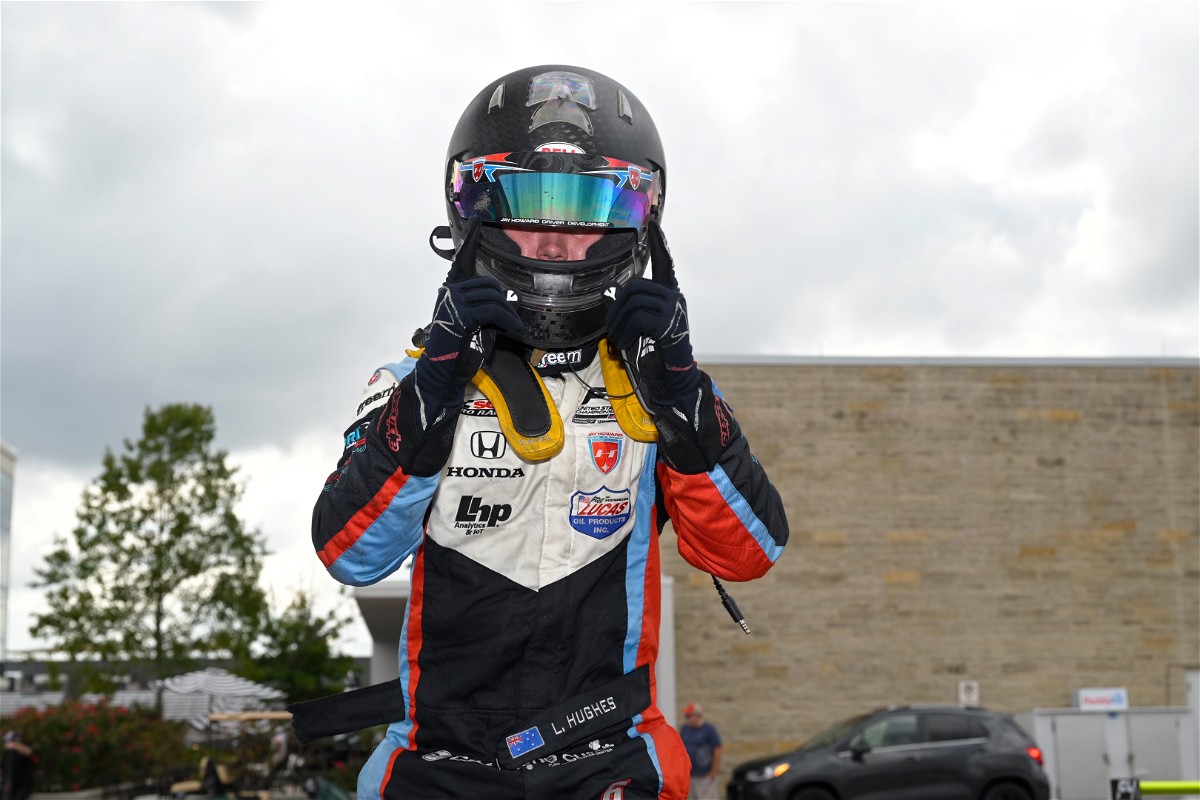 Jay Howard Driver Development’s Lochie Hughes was crowned United States Formula 4 champion in the final round at Circuit of the America, where he won two races.

Velocity Racing Development’s series returnee Jacob Loomis started the weekend on top, setting the pace in practice and qualifying to get his first pole position. Loomis raced in US F4 in 2017 and ’18, claiming four podiums in 26 races.

Just 0.047 seconds slower in qualifying was Hughes, and his title rival Bryson Morris was 0.135s from pole in third place. Everyone else was at least six tenths off the pace, and series frontrunners Alex Berg and Andre Castro were among four drivers unable to set a representative laptime but were allowed to start race one.

Morris was shuffled down to fourth on the second lap of race one by Velocity’s Noah Ping, who would go on to win the race. He passed Hughes on lap four for second place, then tried to stick with team-mate Loomis.

The poleman seemed to have the job done until Turn 13 on the last lap, as he made a mistake and Ping got past into the lead.

Ping claimed his fourth win of the season by 0.244s, with a big gap back to Morris in third and Velocity’s Ethan Barker in fourth. Hughes was down in sixth, behind Crosslink/Kiwi Motorsport’s Ryan Shehan.

But post-race Morris was penalised five seconds for gaining an advantage off-track, and Shehan penalised 5s for causing a collision. Hughes had led the points on victory countback, but by moving up to fourth while Morris was dropped to sixth, it meant he went into the penultimate race 11 points ahead.

The title fight was again impacted by penalties in race two. Hughes charged from sixth place on the grid to victory, making it up to second within three laps and having Morris as the driver he had to overcome for the lead.

He got that job done into turn one on lap five of eight, and stretched out a 1.844-second lead by the finish. Before the season finale on Sunday, Morris was penalised 5s in race two for crossing the pitlane exit line, and Shehan 5s for causing another collision. It dropped Morris to seventh, and Shehan from seventh to 11th, and made Hughes champion.

That eased the pressure for the final race, at least in title term, as Hughes started from pole but had to hold off Loomis for his sixth US F4 win.