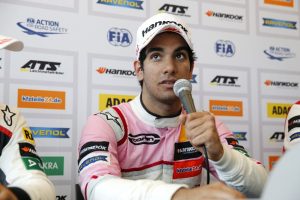 The 20-year-old Indian has spent the last two years racing in European Formula 3 for Carlin, scoring eight podiums including two wins. He finished sixth in his maiden season, but ended up 10th in the standings this year, as the team struggled to replicate its 2017-title winning pace.

His first taste of GP3 machinery came in the post-season test at Abu Dhabi last year, also with MP, which was simultaneously making its debut in the series.

?After my 2017 test, it will be good to gain some more GP3 experience ahead of the 2019 season?, said Daruvala, who finished 13th in the Macau Grand Prix last weekend.

“I?m happy that MP has given me the opportunity to do so. It?s a busy November month for me, adding Abu Dhabi straight after Macau, but that?s only good.”

Daruvala becomes the seventh different driver to race for the Dutch outfit. He will take the #24 car left vacant by Formula 2 graduate Niko Kari during the Sochi round, and will partner Richard Verschoor and former European F3 team-mate Devlin DeFrancesco.

?I?m pleased to welcome Jehan to our GP3 team for the final weekend in the series? nine-year history before we move on to the all-new FIA F3 in 2019?, said MP team manager Sander Dorsman. ?I?m sure Jehan will gel well with Richard and Devlin, and will help us wave goodbye to GP3 by going out on a high.?

MP is among the 10 teams confirmed to take part in the new International F3 series, which will replace both GP3 and European F3. Daruvala will be joined on the grid in Abu Dhabi by his 2018 F3 team-mate and Macau star Sacha Fenestraz, who will be making his second appearance for Arden.