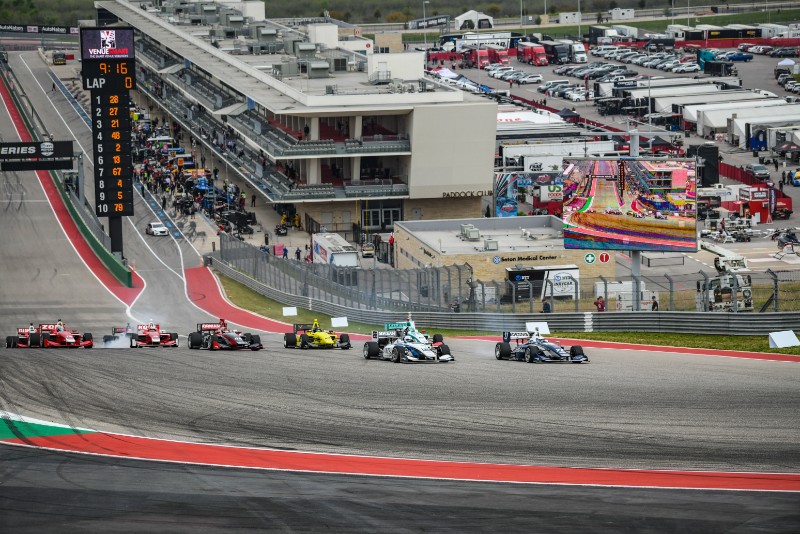 Indy Pro 2000 and USF2000 will join fellow Road to Indy series Indy Lights on the IndyCar support bill at Circuit of the Americas in 2020.

The United States Grand Prix venue became home to a IndyCar race for the first time this year, with Indy Lights running two races in support – both won by championship leader Oliver Askew.

Races at COTA will follow the traditional St. Petersburg season opener for IP2000 and USF2000, with Indy Lights now adding a fixture at Barber Motorsports Park, which was dropped for 2019 in place of a COTA visit.

USF2000 has also added a third race to its early May date on the Indianapolis Motor Speedway road course.

“I am very happy with our calendar for next season,” said Road to Indy boss Dan Andersen.

“We’ve managed to eliminate the large break we have had in April with a return to Barber Motorsports Park for Indy Lights and the addition of Circuit of The Americas for Indy Pro 2000 and USF2000. Now all three series are racing monthly from March through September.

“Juggling our test days to coincide with race events will aid teams with their budgets while providing valuable additional track time over our 2019 schedule. We’ve also extended the life of our three chassis across the board to provide additional cost savings to our teams.”

Indy Lights’ Dallara IL-15 chassis will remain in service until at least 2022, its eighth year of racing, with the newer Tatuus cars for the lower categories being kept through to 2024. The total value of the scholarships for the three series next year has been estimated by Andersen at over $2.7 million.

After the conclusion of the 2019 Road to Indy season, the ninth annual Chris Griffis Memorial Test will take place on the IMS road course in October. Alongside it will be a RTI-ran scheme which involves visits to IndyCar team Ed Carpenter Racing, Dallara and Darren Manning’s iAdvance Motorsports – the latter of which include simulator time.

Spring Training also returns next year for three days at Homestead-Miami Speedway as the traditional pre-season test. The in-season tests have now been scheduled to take place on race weekends at the host circuits to save costs.