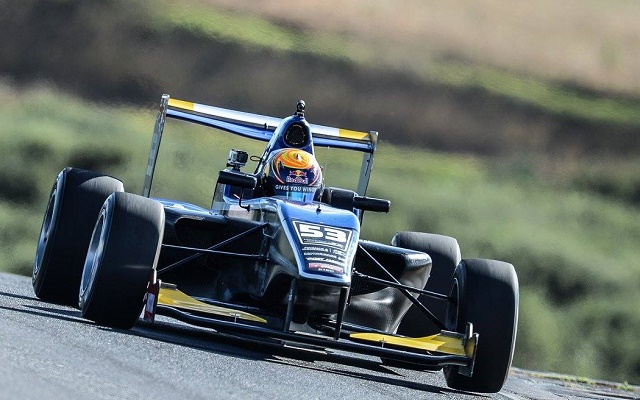 However, in the opening session, it was Brazilian Sergio Sette Camara who ran the show, setting the benchmark in his debut session in the series.

Camara, a graduate of the F3 Brasil series, took over the #7 car of Dzhon Simonyan and managed to make an instant impact, topping the first practice.

Ilott, who is touted as a prospective Red Bull junior, produced a sign of things to come by taking third in the morning session, just 0.02s behind squadmate Thomas Randle.

Session two was rather eventful as it was interrupted by two red flag periods. Victory’s Ferdinand Habsburg led at eight minutes when Maini went into the tyre wall, while an off for Sette Camara suspended the session at halfway point, with Ferrucci in the lead.

Eventually, Markelov emerged at the top, narrowly beating the time from the opening session and being the only one to do so. His teammate Alfonso Celis was second, with Randle narrowly leading MacLeod and Ferrucci in third.

Habsburg ended up sixth ahead of championship leader Lance Stroll and top local James Munro, with Ilott and Maisano making up the top ten.

The times finally started tumbling down in the final practice and Ilott became the first driver to dip below 1:24s after ten minutes. Maisano then briefly led at the halfway point, but the top spot ended up with Ilott.

It was a comfortable lead for the Briton, too, who managed to one-up the Frenchman by more than 0.25s. Munro picked up third, leading teammates Ferrucci and MacLeod.

Habsburg was sixth again, while Mathias Kristensen, who was slowest of the day heading into the final session, rebounded with a solid seventh right ahead of Markelov. M2’s Charlie Eastwood beat teammate Stroll to ninth.

Chudleigh makes Fortec switch for 2015 in Eurocup and NEC