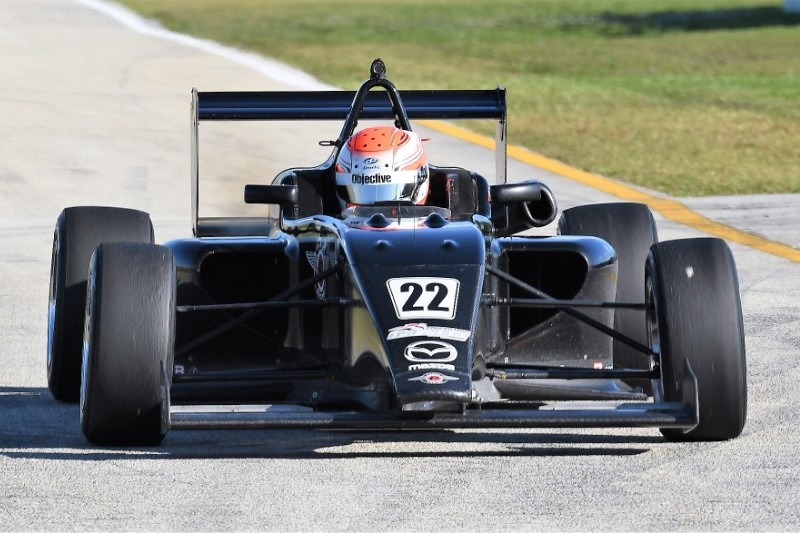 Hunter McElrea has joined forces with Pabst Racing for the 2019 USF2000 season as he makes use of his Road to Indy Shootout prize.

The Australia-based Kiwi-American won the Australian Formula Ford title last year, taking 13 victories on the way, then topped both post-season USF2000 tests with Pabst ahead of his $200,000 Shootout victory.

?Without the amazing support from Mazda Motorsports and my personal sponsors, Doric NZ and Miles Advisory Partners, I would not be here, so I cannot thank them enough for giving me this amazing opportunity!?

McElrea, 19, started karting 10 years ago, and has been racing in cars since 2015. Australia’s regional FFord series was where his ventures, before he moved up to the national championship. He finished ninth in his first season, followed by fourth the next year and then the title in 2018.

?The main difference from the Formula Ford I was driving last year is having a slick tyre and aerodynamics.

?This obviously means a lot more overall grip which I really like. Living in the USA this year is also a new adventure which I am enjoying a lot. I am extremely happy to be joining a top Road to Indy team such as Pabst Racing.

?I am really looking forward to putting the massive effort from the team and myself from the off-season to use, and I will do my very best.

“Obviously, tracks with history such as Indianapolis, Road America and Laguna Seca are going to be special, but also experiencing street courses and an oval for the first time will be a great experience. I can?t wait!?

Pabst Racing team owner Augie Pabst added that the team was eager to have McElrea as part of its line-up.

?This announcement has been in the making for quite some time and we couldn?t be more excited to have a talent such as Hunter as part of our team,? said Pabst.

“Mazda Motorsports has been a huge part of open-wheel racing for many years and we couldn?t be more honoured to put this effort on the racetrack for 2019.?

Colin Kaminsky and Yuven Sundaramoorthy will also be driving for Pabst in the upcoming season.

After less than a season in USF2000, Danial Frost will move up to Indy Pro 2000 with Exclusive Autosport for 2019.

The 17-year-old Singaporean finished 17th in USF2000 last season after entering three rounds with the team. He achieved one top five finish before focusing on a MRF Challenge campaign where he won once but only finished seventh in the standings after missing a round.

?I?m super stoked to have been given the opportunity to be working with Exclusive Autosport for this season,? Frost said of his IP2000 move.

?I?ll be working harder than ever to get the results and I?m ready for the next step in Indy Pro 2000!?

Top 10 European Formula 3 drivers that F1 missed out on