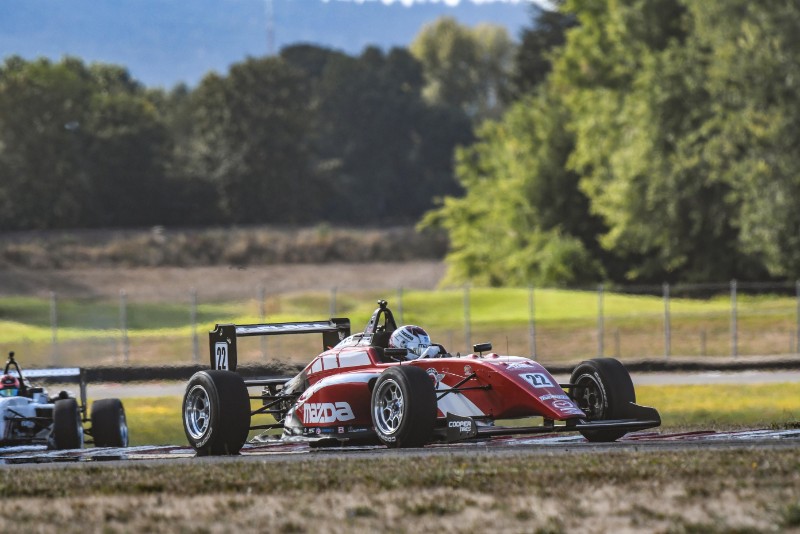 Hunter McElrea moved into the USF2000 points lead in the penultimate round of the season with a double win at Portland International Raceway.

McElrea dominated the weekend as he took pole position for both races before enjoying two lights-to-flag victories.

Cape Motorsport’s Braden Eves – who entered the weekend with a nine-point cushion in the standings to McElrea – finished second in both races but didn’t have an answer to McElrea’s pace after the first eight laps of race one.

Eves had a brief scare during race two when he made slight contact with Christian Rasmussen. While he was unscathed, Rasmussen had to make a pitstop to replace a flat tyre.

Rasmussen had challenged Eves for second place during the final moments of race one, with less than a second separating the pair at the chequered flag.

Legacy Autosport’s Zach Holden was catching up to Eves throughout race two after he got round Colin Kaminsky on lap four of 25, but didn’t have enough time to be able to get close to challenge.

Kaminsky finished fourth in both races, closing the gap slightly in the fight for third in the standings with Darren Keane – who ended up in fifth on both occasions – to four points entering the final weekend of the season. Neither driver can catch up to McElrea or Eves in the standings.

Jak Crawford, Manuel Sulaiman, Eduardo Barrichello and Bruna Tomaselli took the chequered flag in sixth, seventh, eighth and ninth respectively in both races in Portland. Holden completed the top 10 in race one, while championship debutant Josh Green finished 10th in the final race of the weekend.