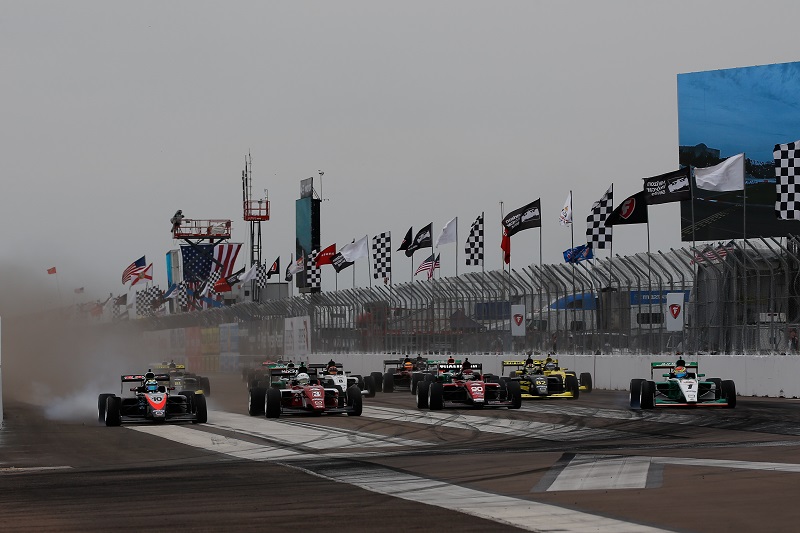 At Formula Scout we do like a driver with talent. It?s even better to see that talent get converted into results. A driver without talent or results can succeed if their pockets are large enough to fund their way up the ladder, and sadly the opposite can be said for drivers without that money.

Two talented drivers who broke records last year are Harrison Scott and Jamie Caroline, although budgetary issues has meant that both have ended up in America for 2018.

Both are in similar positions in the standings after the first two races at St. Petersburg, and both immediately turned heads in America.

The better prepared of the two was obviously Scott, who has near enough been involved in RP Motorsport?s Pro Mazda project since the beginning. This is because the Italian team, which ran the Englishman to the EF Open title, only decided on racing in America late last year after its Formula V8 3.5 programme ended.

Scott was revealed as one of the team’s drivers in February, although had been involved with the team?s plans long before that as his dreams to race on a higher rung of the single-seater ladder in Europe became increasingly distant.

So although Scott had the continuity of working with RP Motorsport, neither party had any experience of America.

Scott and Caroline weren’t the only Britons who made their American debuts in St. Petersburg, and arguably it was IndyCar driver Jordan King who made the biggest impression of all.

The 24-year-old has competed in GP2/F2 for the last three years, before making the surprise step to become Ed Carpenter Racing’s road and street course driver for 2018.

Previous incumbents of the seat have included Mike Conway and Spencer Pigot, with Conway famously winning at Long Beach and Toronto in 2014 for the team.

King looks set to repeat those feats, having been one of the outright fastest drivers on his first race weekend. He topped his group in qualifying, was was fourth fastest in the changing conditions in the ‘Fast Six’.

At the start he moved up to third, and was leading by lap six. He was still in podium contention until lap 34 of 110, where a left front puncture led to a small brush with the barriers and a lengthy pitstop. It put him three laps down, and he finished the race in 21st place.

Nowhere was this more evident than at the first corner of the first race, where Scott completely outbraked himself while going for the lead from third, dropping him down the order.

Being in such a high position was impressive enough, and he did it again in the second race, this time from seventh on the grid. He knew that the lack of grip on the inside would require earlier braking this time, and he took the lead with aplomb.

Unfortunately for Scott, his superlative start was assisted by the green flag being waved too early, and the race was restarted and the order reset after a caution period and red flag.

At the second start he didn’t make as much progress, and actually ended up getting front wing damage.

On a track riddled with bumps and close walls and with a pack of hungry drivers behind him, Scott did a remarkable job to hold on to fourth until a late caution period.

By this point the front wing had detached fully, and Scott had to fight his car on the restart, now bereft of any front downforce, to get through Turn 1 without crashing.

He dropped to the back of the grid, and although his title chances now seem thin, nobody is betting against him being at the front at Barber Motorsports Park next month. 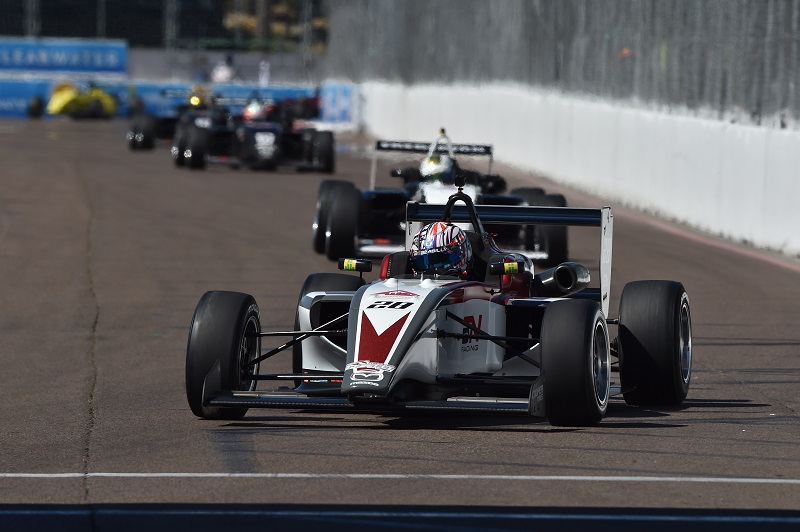 Caroline never headed his field, although he was never likely to with a deal only put together days before the season started.

His drive with BN Racing came at the expense of 17-year-old American Zach Holden, who managed to find a seat at DEForce Racing in time for free practice.

Remarkably, Caroline almost put his car on pole at the first opportunity, but his inexperience showed when the Streets of St. Petersburg ‘bit’ him, leading to damaged rear suspension and a seventh placed starting spot.

He was immediately on the limit, something that Americans appreciate, and he was one of the fastest drivers in traffic despite having never driven on a street circuit.

Caroline’s inexperience compared to Scott shows, and St. Petersburg ‘bit’ him again when he went over the limit during the first race, smacking one of the circuit’s many walls and retiring from the race. He was in second place at the time.

In the second race he was just as aggressive, often sliding through corners in close proximity to his rivals, and finished a well deserved fourth. Third was on the cards until he outbraked himself at Turn 1 late on, dropping him to fifth.

Race one winner Kyle Kirkwood didn’t last long in fourth, with Caroline pulling off a brilliant move that earned the acclaim of the commentators post-race.

Despite both sitting way off the top of the standings, Harrison Scott and Jamie Caroline are names that will be firmly on America’s lips after this weekend.