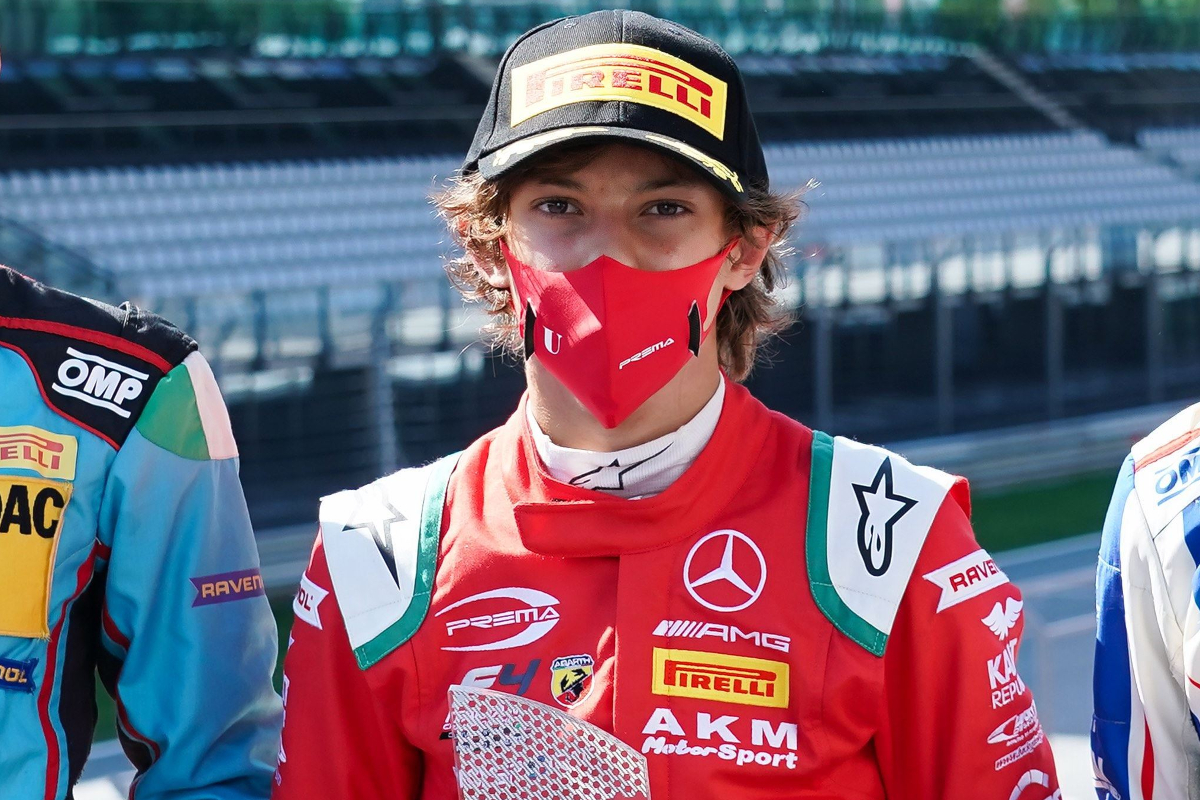 Signed up by Formula 1’s dominant force while still racing mini karts, there’s definitiely a sense that Andrea Kimi Antonelli – son of some-time racer and successful team boss Marco Antonelli – is “the chosen one” in the same way that Lewis Hamilton was after picking up Ron Dennis’s patronage and becoming a McLaren-Mercedes junior during his karting years.

Antonelli turned 15 almost three weeks ago, and while he was old enough to race a single-seater car before then – such as in Danish Formula 4 where Sauber junior Emmo Fittipaldi competes – Mercedes had its own plans for its Italian star.

His preparations began early this year, testing an F4 car publicly for the first time at the same Red Bull Ring circuit where he debuted last weekend. Back in March he was with his father’s AKM Motorsport team, and in his snowy half-day in the car was third fastest and 0.162 seconds off Van Amersfoort Racing’s pacesetter Ollie Bearman who has since dominated Italian F4.

Antonelli told Formula Scout ahead of his race debut how, rather remarkably, his first trip to the track didn’t go to plan.

“Unluckily I could do only half a day because the other day my team-mate broke the car and I had to give my car over,” Antonelli said of the test.

“So when I arrived here I wasn’t really ready, also because I wasn’t really expecting to do these last three rounds [of the Italian F4 season], but I really like this [single-seater] world and I’m working as hard as I can to improve every times.”

Part of the complications of that first test, which are still being felt today, is that Antonelli broke the tibia and metatartus in his left leg last November during the final of the CIK-FIA World Karting Championship. 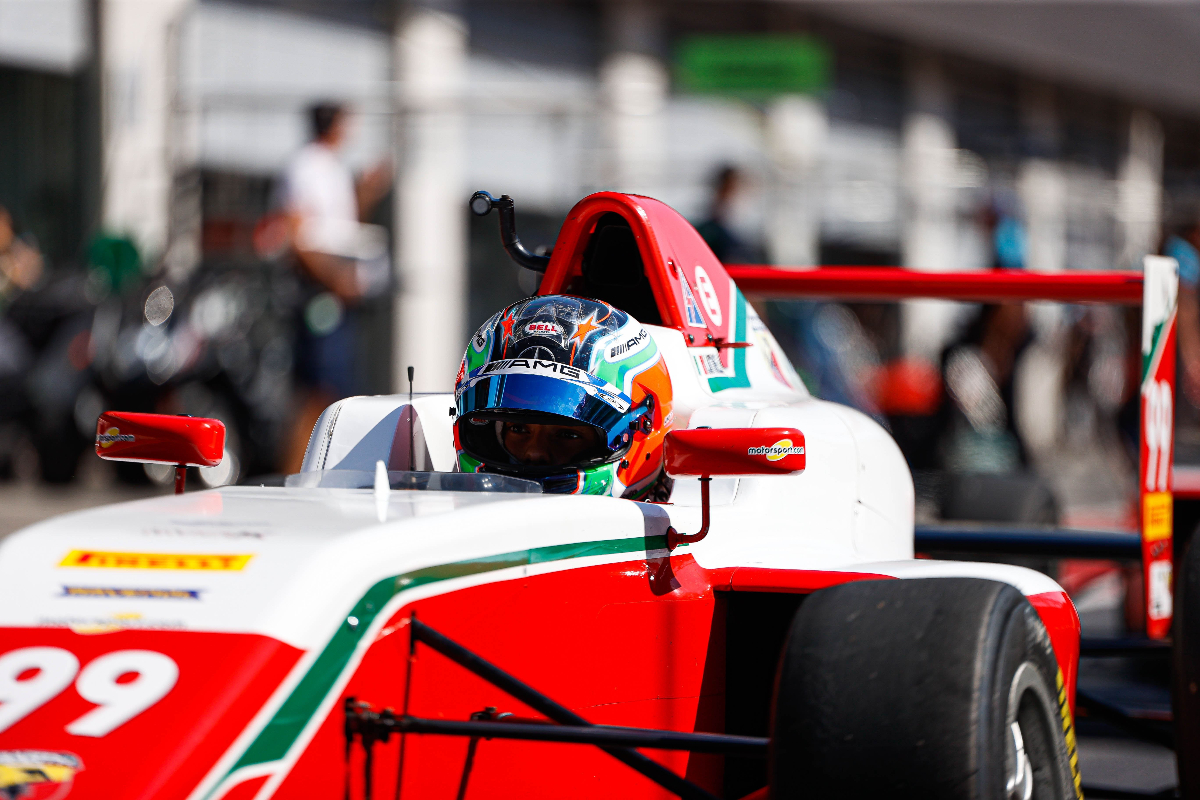 “Most of the time I confused myself because sometimes I was trying to brake with the left, but I realised that I had no strength. Was hard. I’m happy that I’m almost fully recovered.”

An almost full recovery wasn’t enough for the Red Bull Ring, which shows how impressive the results to come were, as the heavy braking zones of turns one and three in particular require a lot of brake pressure and therefore a strong left leg.

However Antonelli wouldn’t even be in the position to be competitive in an F4 car were it not for race training he did with the leg. After wrapping up the CIK-FIA European Karting Championship title for OK karts in July, he moved into the more physical shifter KZ kart for a European Championship round and finished sixth, then the weekend before his F4 bow turned up to the KZ World Championship and came ninth against far older, stronger and more experienced opposition.

“KZ helped because actually when I get back to go-karts I was struggling with the leg,” Antonelli said after his maiden F4 qualifying session, which he ended in 10th place and 0.451s off pole-sitting Prema team-mate Sebastian Montoya.

“With KZ you have to push harder than the OK one, and I think that helps a lot, also because in go-karts you have a lot of vibrations so you have to hold the brake [down], and that was the hardest thing for me in that moment. Every time I was getting better, also in the car with the brake compared to yesterday I get better. So yeah, I’m really happy about it.”

Antonelli’s F4 mileage before his debut included another test day with AKM at Vallelunga in June, then a Ferrari Driver Academy scouting camp that Italy’s motorsport federation nominated him for alongside another son-of: Brando Badoer. 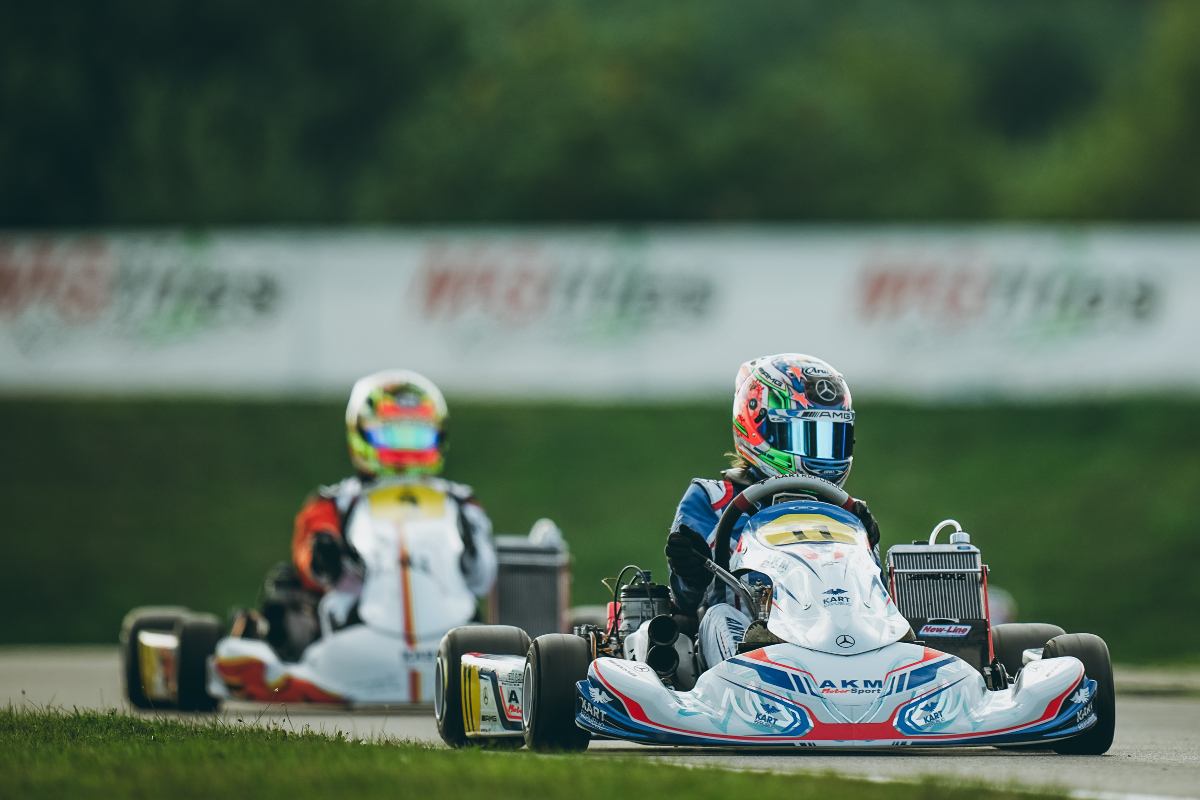 His first actual running with Prema and the crew he would work with last weekend was at Italy’s Cremona circuit, which has heavy braking zones and corners reminiscent of Yas Marina Circuit. Prema’s F4 team manager Grazia Troncon revealed that Antonelli will drive there in the races supporting F1’s Abu Dhabi Grand Prix in December, as it will be the first time that teams get to race Tatuus’s second-generation F4 car before it is adopted by series across the globe, including Italy’s, in 2022.

Troncon also shared her first impressions of Antonelli’s debut after he converted his 10th place on the grid into ninth – and the rookie classification win – in his first ever single-seater race on Saturday.

“This is a good training for him because 30 cars on track is not easy, and also this track also he already tested,” she said.

“But it was very, very cold because of the snow and it was in the period when he had the problem with the leg, so honestly I think he started well without doing any mistakes today and he has to focus to keep the best from the experience.

“The whole team thinks he’s a very talented driver. He showed good performance in karting, but also the results coming today show that he has a good potential so he just has to improve and work to put everything together. All the guys here [in Italian F4] want to do a good job, so it’s a hard training also for him.

“Some things are training in the small circuit, and and some things are racing. They’re not the same things. But I think it’s a good opportunity for him, he has fast team-mates too.”

Guiding Antonelli through the weekend, and doing so for the season’s remaining rounds, was Pedro Matos. The former racer has form working alongside young talents, having engineered Oscar Piastri and Dennis Hauger’s maiden car racing campaigns before winning the Formula Regional Europe title with Frederik Vesti and continuing that relationship into FIA Formula 3 where he worked with Piastri too. He’s now reunited with Hauger and they lead the way in F3. So it’s no surprise he was trusted with possibly the most high-pressure support role for a single-seater debutant since Max Verstappen. 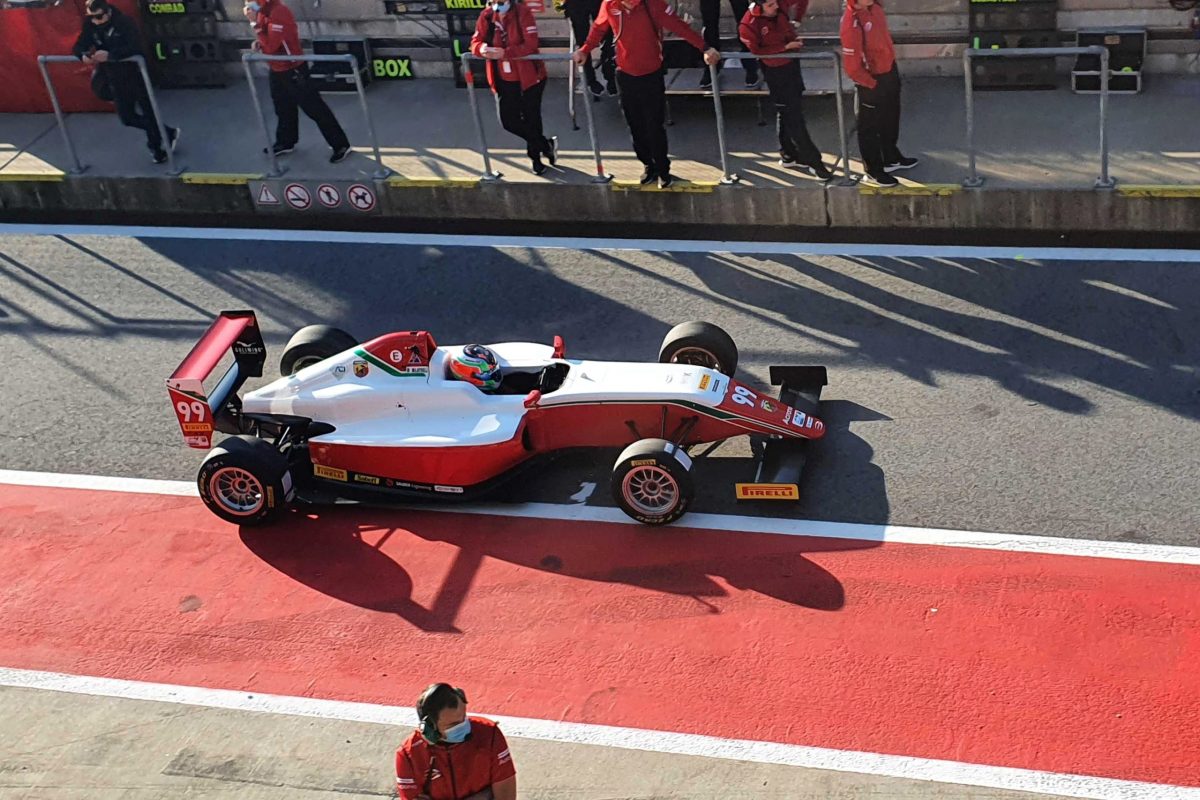 “Pedro is really good,” said Antonelli after his debut. “I like him a lot. He’s really calm and he’s really good to explain everything. I really like working with him, and I think we can achieve really good results with him.

“Race one went quite good. For being my first race, it’s a quite good result. I want to do better, but I make a lot of experience, I learn a lot, especially when I’m very close to the guy in front because when you improve [to close in on cars ahead] you have dirty air, so it’s harder to control the car. And that was my weak point in the race. But for tomorrow it will be much better.”

Sunday’s two races were going to be a little harder though, as Antonelli was 16th fastest in the second qualifying session.

“In quali two we didn’t really get the lap together,” Matos told Formula Scout. “His pace was good enough for top 10. I think this track is the hardest for rookies because of the big stops, and coming from karting still the brake pressure needs to be a bit improved but I’m pretty sure it will be quite a good progression from him.”

Because he can’t brake hard enough, and the fact inexperience means he is yet to ‘unlearn’ skills that were applied in karting, Antonelli went too hard on many corner entries but that is widespread when it comes to graduating karters and particularly those who are still young enough to be a year or two away from a growth spurt in height and muscle mass.

Matos added that Antonelli “was losing everything in the first three corners and then he was matching everyone, even quicker, through the last bit of the track, so I’m expecting good things from the end of the season!”

Antonelli rose four spots in race two on Sunday morning to finish 12th, then had an almighty challenge to cap off his debut weekend. Just before the start of race three, heavy rain hit the Red Bull Ring and so action got underway behind the safety car. A majority of the grid peeled in to the pitlane at the end of lap one to switch to grooved tyres, and Antonelli – last in the queue of Prema’s sixtet of cars – spent nearly two minutes in there before he returned to track in 26th place. 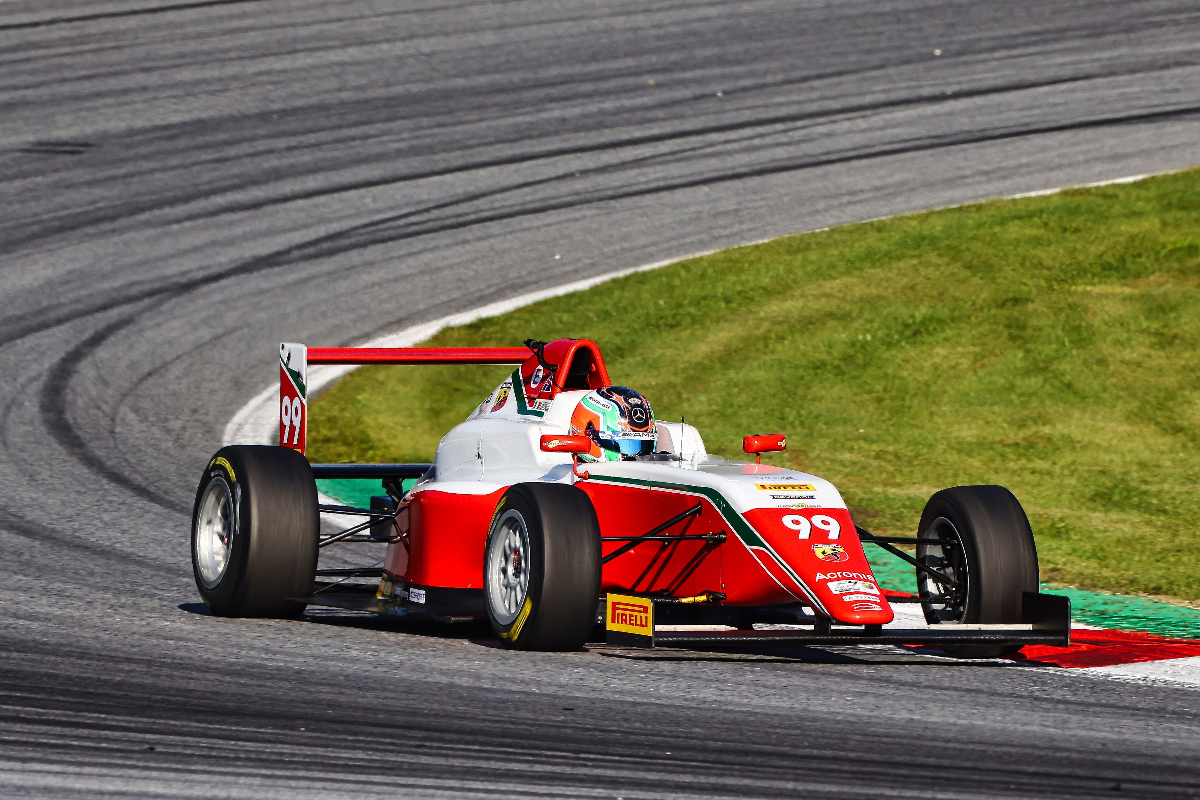 There were two more safety car interruptions, but he was still able to rise up the order. He gained five places from drivers who chose not to pit, and three more from those who went off, but in the seven green flag laps he overtook eight cars and snatched ninth from Pedro Perino at turn five on the last lap.

No other driver made up as many places, although US Racing’s race winner Tim Tramnitz fell from first to 15th with his pitstop and then charged back up to first. Most teams were anywhere from 12 to 50 seconds faster with their pitstops than Antonelli’s, and a drop of 4.3°C in the track temperature during the race made the wet weather running even trickier.

“He had a very hard experience [for learning] but he took a good rookie podium in his first race in his career, and also in this kind of conditions, very slippery track, pitstop, everything, he did a good job,” Troncon said afterwards.

Matos was also glowing, and the data explaines why. Antonelli set the third fastest lap, only slower than sophomore F4 racers Tramnitz and Joshua Dufek who dominated stages of the race, and he was also only bettered by those two in the brake-heavy sector one.

“I think he wished that race lasted for a bit longer because he was flying,” said Matos.

“For a first weekend it was the most experience you could get. He has never driven on the wet before, so that last race was really impressive.

“We had to be careful with the pitstop, because it was just unsafe [in a busy pitlane], so we had to do it cleanly and do it slowly so we lost a bit of ground there. As Prema have a lot of cars running, we have only one wheel gun, two mechanics, so it’s quite tricky. But he did a really good job.”

How did Antonelli rate the weekend, and the challenges of race three, himself? 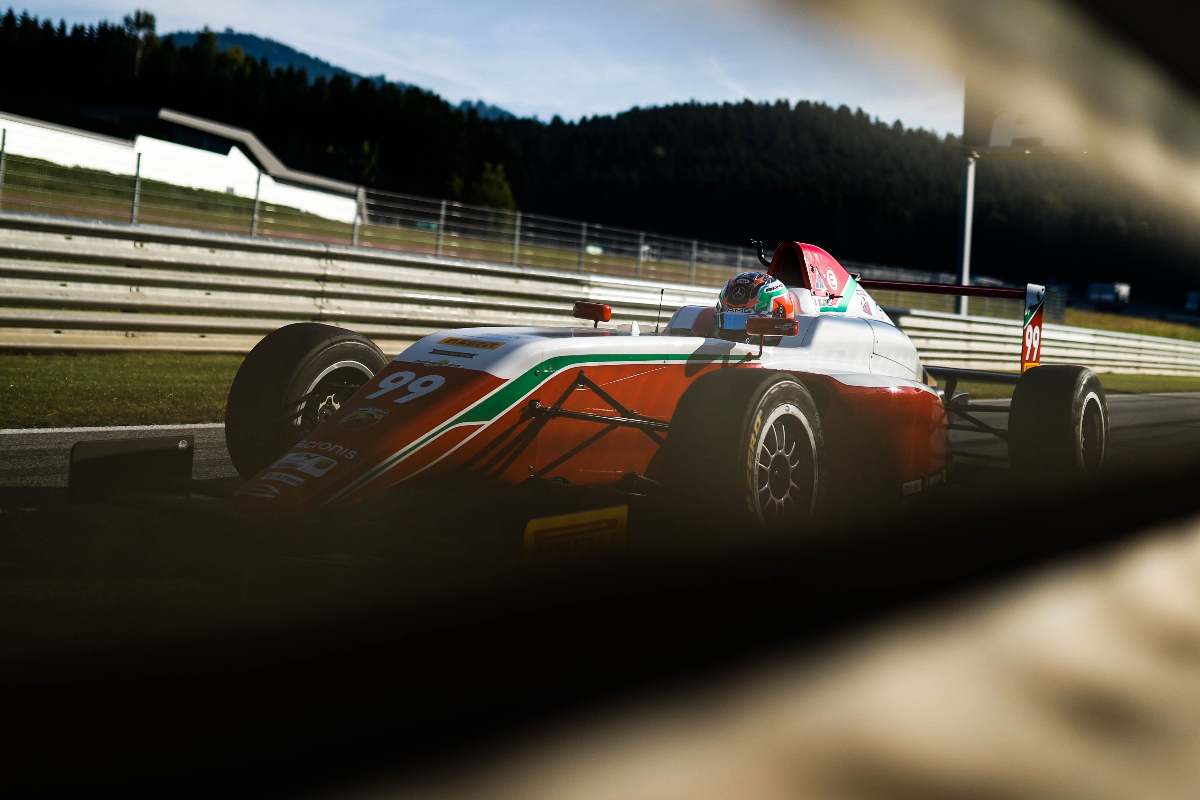 “Unluckily in the pitstop we lost a lot of time because when I came out I was last almost. But I felt very comfortable with the car and we were really fast and finishing P9 is a great result.

“I’ve improved a lot since Thursday. Not only in the battle with the other drivers, but also on my driving. I’m understanding more the car, brake pressure every time was getting better too. Now in the rain you don’t really need a lot of pressure, but I think in the dry, every race, every time I was improving and I think for Mugello we will be ready.”

Based on his performances in an F4 car so far – and a superb attitude (and fluency in English) out of it – it’s going to be great to see what Antonelli can do next with his part-time racing programme, which resumes at Mugello on October 8-10.