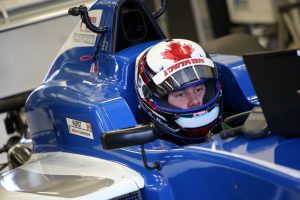 Canadian driver Ben Hurst has been revealed as the Hillspeed team’s first signing for the 2018 BRDC British Formula 3 season.

Despite ending its formal partnership with Formula Ford 1600 powerhouse Cliff Dempsey Racing at the end of 2017, the team’s first signing is 20-year-old Hurst, who made?it to the final of this year’s FFord Festival with the CDR team.

Hurst, reigning champion of the Ontario-based Toyo Tyres F1600 series (where he used Honda power), made his initial appearance in Britain as a result of his selection for the Team Canada Scholarship, similar to the Team USA scheme which counts Josef Newgarden and Oliver Askew as its graduates.

?I?m really looking forward to getting started with Hillspeed,? said Hurst, who has relocated to the UK.

?It was the right time to make the step up into a faster car and I have found the right series and team to make that step with.

“It?s an absolute privilege to be racing in the UK against such high competition and I?m very excited for the new challenge.?

?Ben is a very talented young driver and we were delighted when we were approached for him to test the F3 car,? said team principal Richard Ollerenshaw.

?I?m very pleased to say a race deal quickly followed and we?re now very much looking forward to seeing how he gets on during his rookie F3 season next year.

?There?s a lot for Ben to learn, the F3 car is obviously a step forward from FF1600, but the pace and application he?s shown up to now leave us without any doubt he will be a strong competitor and a driver who will definitely make good progress in his first season of F3.?