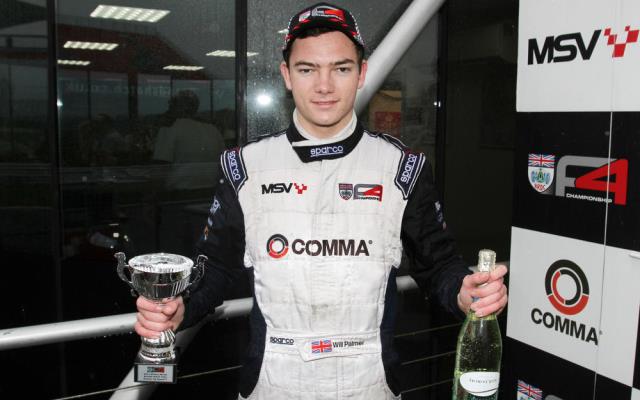 BRDC F4 Winter Series champion Will Palmer has been confirmed to be staying in the series for a second year, signing a deal to remain with HHC to aim for the 2015 title.

Palmer, younger brother of GP2 champion Jolyon, graduated from the Ginetta Junior Championship, where he was 12th, for 2014 and made his single-seater debut in BRDC F4.

Although he was beaten by his more experienced teammates within the team, he still took a solid sixth in the standings, scoring two victories and five more podiums.

In November, he took part in BRDC F4 Winter Series and comfortably secured the title with four wins out of eight races.

“I’m really pleased to be continuing in F4 with HHC Motorsport in 2015. We’ve had much success this year and the title is the only goal for next season,” said Palmer. “I’m sure it will be very competitive once again, but with all we have learnt together this year I’m very confident of being right in the championship fight.?

HHC’s drivers won ten of the 24 BRDC F4 races in 2014. Palmer is the team’s second signing for next year, as they’ve previously confirmed debutant Harrison Newey.

“We’re delighted to continue working with Will in 2015 as he progresses into his second season in the BRDC Formula 4 Championship. Will has become a key member of the team in the past few seasons, and he?s built a great working relationship with everyone in the outfit coming up from Ginetta Juniors to F4 with us,” added Charlie Kemp, HHC Commercial Director.

“He established himself as a series frontrunner in 2014 and followed that up with a cracking job to win the BRDC F4 Winter Series, so we’re looking forward to building on that and enjoying even more success next season.”

Palmer is the fourth addition to the 2015 BRDC F4 grid, joining the aforementioned Newey, as well as PetroBall duo of Gaetano di Mauro, Palmer’s biggest rival in the Winter Series, and Enzo Bortoleto.