written by Steve Whitfield 6 May 2022 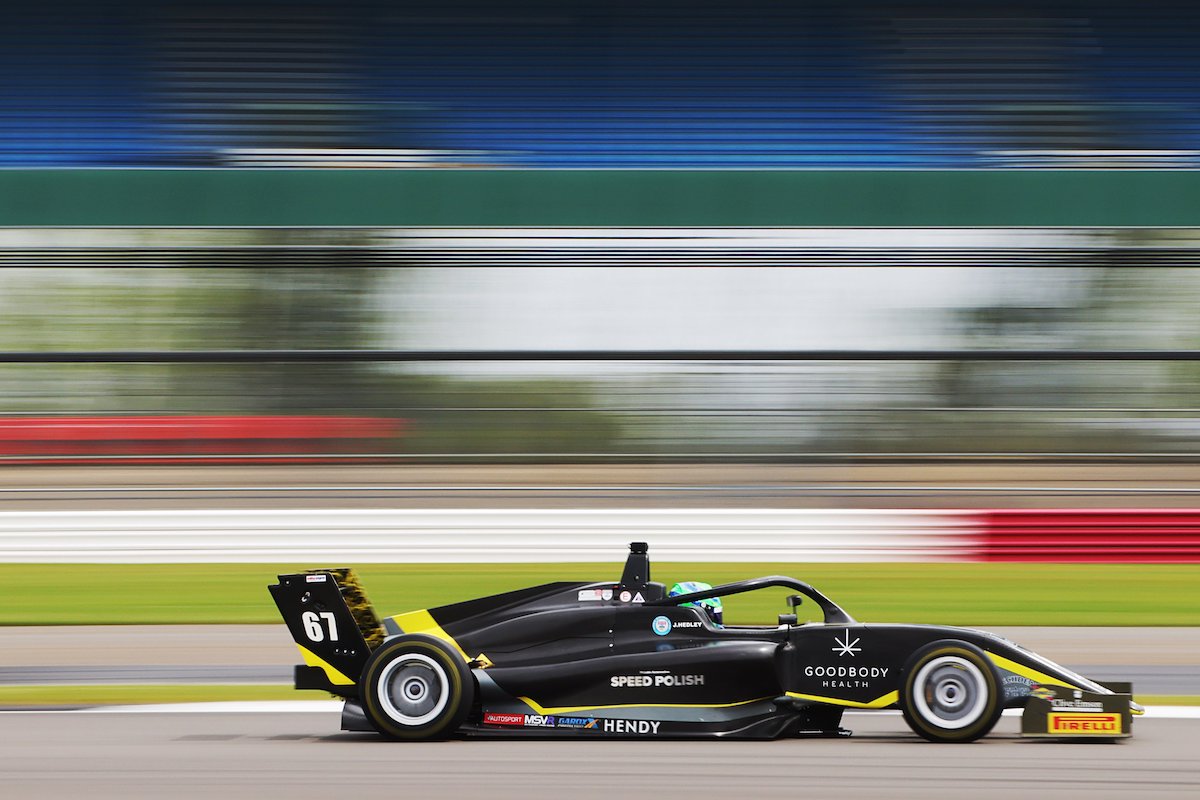 Elite Motorsport’s James Hedley set the fastest time in pre-event testing ahead of this weekend’s second round of the GB3 Championship on the Silverstone Grand Prix circuit.

Hedley recorded a best lap of 1m52.304s in the first of two sessions on Friday to eclipse the best time from the previous day.

JHR Developments’ Matthew Rees led the first of four sessions on Thursday with a time of 1m54.169s, before Chris Dittmann Racing’s McKenzy Cresswell lapped fractionally quicker inside the final five minutes. But it was Fortec Motorsport’s Joel Granfors who finished on top thanks to a late effort of 1m53.360s.

Championship leader Luke Browning made his first appearance in session two, setting a best lap of 1m53.764s, but it was Granfors who led the way again after bettering his session one effort, before Cresswell set the best time of the morning so far.

But it was FIA Formula 3 regular Jak Crawford, taking part in a one-off test for Douglas Motorsport, who ended up quickest with a 1m53.179s. Believed to be sampling Silverstone for the first time ahead of F3’s visit in July, he went even quicker still to also top both afternoon sessions, ending the day with a best lap of 1m52.380s before leaving for Miami to attend this weekend’s grand prix with Red Bull.

Granfors and Elite’s Tom Lebbon recorded their best laps in session four to end Thursday’s running in second and third overall, while Hedley’s time from session two put him fourth.

Hedley then set his test-topping time in session one on Friday, beating team-mate Lebbon by over half a second, with several drivers improving from the day before. Granfors then set his own personal best to top session four, ahead of Rees and Hedley, the Swede ending up third overall. Browning found 0.7s to end testing in sixth ahead of Carlin’s Javier Sagrera, who also improved.

Roberto Faria finished 13th overall for Carlin, having sat out Friday’s running to attend an exam. Arden’s Alex Connor did not take part on Thursday, but returned to the track on day two to record the 11th fastest time overall.

Connor’s team-mate David Morales sat out most of testing due to feeling unwell after taking part in Thursday’s opening session. Douglas Motorsport’s Marcos Flack is not at Silverstone this weekend due to clashing Italian Formula 4 commitments.

The GB4 field shared the track with the GB3 runners in Thursday’s four sessions, when it was Fortec’s Nikolas Taylor who was the driver to beat.

Taylor set a 2m02.976s to head session one ahead of points leader Alex Walker, and went 0.6s faster in session two to top the times again ahead of Hillspeed’s Megan Gilkes, who only ran in the morning.

Max Marzorati made his first appearance in the afternoon, and eclipsed team-mate Gilkes’ time to end the day 0.569s adrift of Taylor, who lowered his own benchmark to a 2m01.691s in the final session.

Gilkes was fastest in the first of two GB4-only sessions run on Friday morning, her time of 2m01.824s putting her third overall across the two days.

Taylor lowered his best time from Thursday in the second session, but Elite driver Walker recorded a 2m01.553s to end testing at the top by 0.133s.

Lucas Romanek was on track both days for Oldfield Motorsport, but his transponder was only turned on in Friday’s final session. The debutant set a 2m03.059s in that session, which was good enough for seventh overall. Christian Lester also made a return for Rosserverde Racing, having appeared at the opening round, bringing the field up to 13 drivers for this weekend.