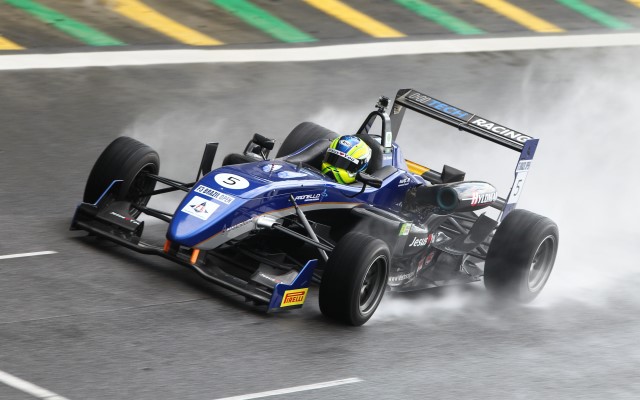 Reigning South American champion Felipe Guimaraes was the quickest after two practice sessions for the F3 Brazil Open on Thursday at Interlagos.

In the dry track in the morning, the Brazilian set a time of 1m31.886s and was 0.127s faster than Cesario Formula’s Dhzon Simonyan.

After a season in Formula Abarth, Lukas Moraes returned to R&R Racing and finished third. The 17-year-old driver set 1m32.846s and led the Light class. Another Formula Renault veteran, Victor Franzoni took fourth in his Formula 3 debut, after having completed only nine laps due to a failure in his Hitech machinery.

During the lunch break, a heavy storm arrived at Interlagos. However, the rain stopped and the second free practice started with drying track but no one was capable of improving the morning times.

Once again, Guimaraes was first, followed by Franzoni. Symonyan was third, with the top five completed by Florenzo and Fortunato. Only eight cars were on track this time as a problem with Pirelli machinery prevented Moraes to join the group. Nicholas Silva chose not to practice due to the tricky conditions.