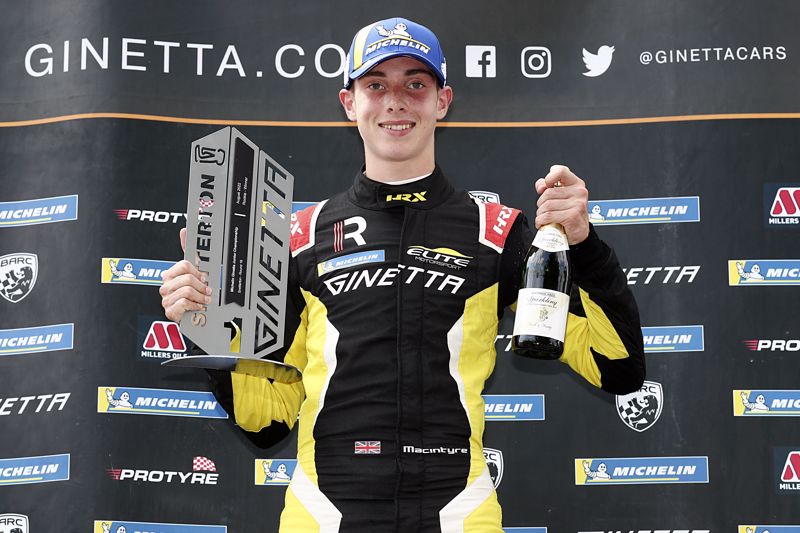 Elite Motorsport’s Ginetta Junior title contender Will Macintyre will make his single-seater debut with the team in next weekend’s GB4 season finale at Donington Park.

The 15-year-old is currently second in the Ginetta standings in his rookie season, with five race wins to his name, and is the only driver able to prevent Josh Rowledge from becoming champion in this weekend’s Brands Hatch title decider.

In 2019, William MacIntyre was signed to Sauber’s karting team for a brief programme after he won the Italian title in the 60 Mini category and was second in the WSK Euro Series. He then stepped up to junior karting and came third in the 2020 Rotax Max Challenge International Trophy, and was third in the IAME Winter Cup a year later.

He made the step up to cars in last November’s Ginetta Junior Winter Series at Brands Hatch with Elite, and signed to stay with the team for a campaign in the main championship in 2022. He is already champion in the rookie classification.

“I’m very happy to be given the opportunity by Eddie [Ives] and Elite to race a GB4 car – it’s an opportunity I couldn’t turn down,” Macintyre said.

“Hopefully we can have similar success in the last rounds at Donington as we experienced in the Ginetta this year.”

“I’m really excited to be putting Will straight from Juniors into a GB4 car,” said team prinicipal Eddie Ives.

“He’s shown his ability to progress quickly in his first full year of car racing, making a big impression in Juniors this season with some exceptional driving.

“Next Thursday’s test day will be the first time he’s driven a GB4 but I’m confident with his ability that we can have a fun and competitive weekend.”