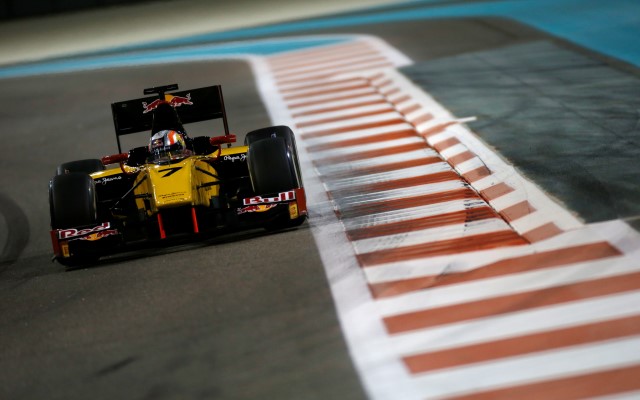 Pierre Gasly pipped GP2 form man Stoffel Vandoorne to top the times at the end of the first day of post-season testing in Abu Dhabi.

Gasly, who succeeded Vandoorne and Formula Renault 3.5 runner-up this year, is testing with DAMS ahead of an expected full-time drive in GP2 in 2015.

After Vandoorne had topped the morning running, Gasly became the only driver to go below the 1m49s mark with a 1m48.948s.

ART driver Vandoorne improved his own time but fell 0.004s shy of joining Gasly in the 1m48s.

On Friday, GP3 champion Alex Lynn will make his GP2 debut for Carlin in place of Luis Sa Silva before heading to ART on Saturday in Vandoorne’s car, which will be driven on day two by Euroformula Open champion Sandy Stuvik. Norman Nato moves from Racing Engineering to Russian Time in place of Mitch Evans, with the Spanish squad fielding Jazeman Jaafar and Simon Trummer.

Nicholas Latifi will return to Hilmer after a day with Racing Engineering and will be joined by Emil Bernstorff. Rapax will field Kevin Ceccon and newcomer Sergey Sirotkin, while Status will run Raffaele Marciello and Dino Zamparelli. Beitske Visser will replace Sergio Campana at Lazarus, and Haryanto will move over to Campos in place of Jaafar.