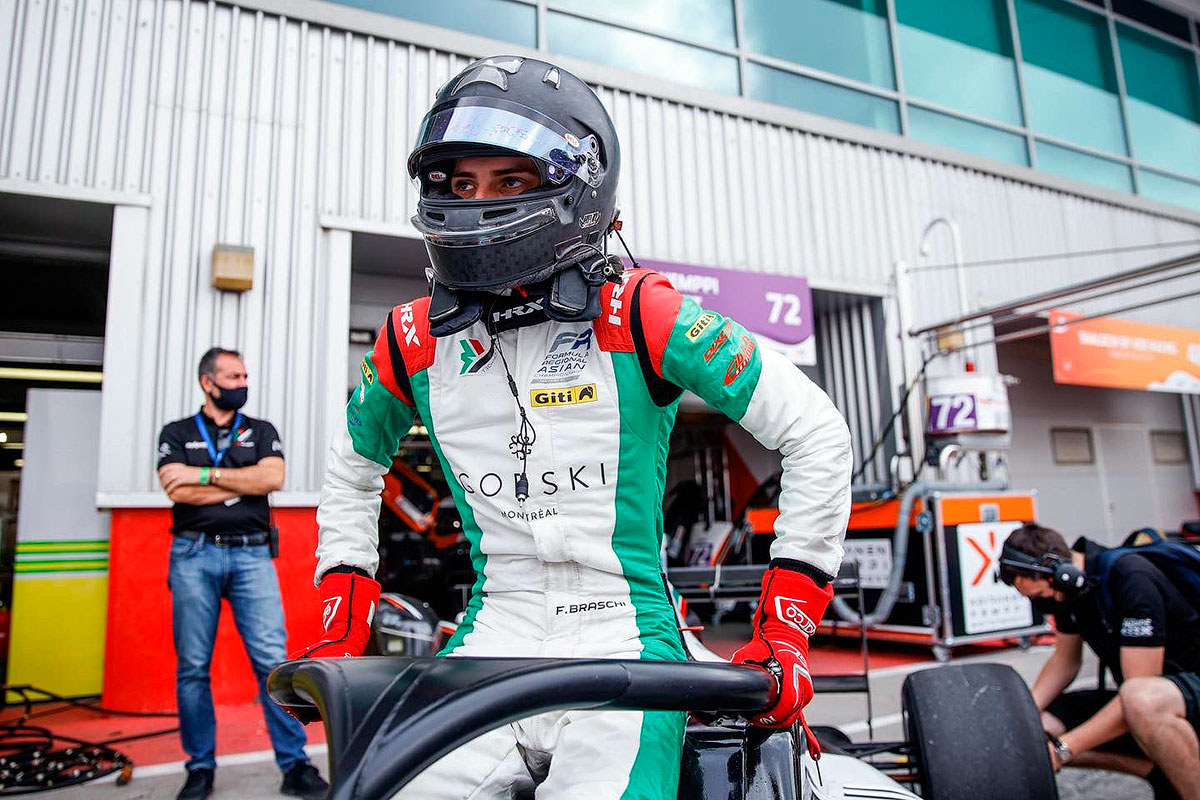 Hitech GP’s Gabriele Mini was first on track in Wednesday’s opening session, but no representative laptimes came in until R&B Racing’s Giovanni Maschio posted a 1m59.750s seven minutes in.

Mini was still out on his first run and he lapped in the 1m58s, with Maschio and then Pinnacle VAR’s Tasanapol Inthaphuvasak moving ahead before three successive improvements from Pinnacle team-mate Pepe Marti brought the pace down into the 1m57s.

Braschi went 0.480 seconds faster to break into the 1m56s, and was on top for 11 minutes before Hitech’s Sebastian Montoya bettered him. He quickly responded, taking back top spot by 0.019s.

The fastest lap was disputed between Mini and Montoya for the next 10 mins, and Mini was first to go sub-1m56s.

PHM Racing’s Taylor Barnard got within 0.166s of Braschi to go second, with Bohra in third and Levente Revesz (R-ace), Dino Beganovic (Mumbai Falcons) and Matias Zagazeta (R-ace) all over half a second back in fourth to sixth. The top 11 were split by a second.

Hitech’s drivers were the early pacesetters again in session two, with Montoya and Jak Crawford setting the first flying laps. Mumbai Falcons pair Andrea Kimi Antonelli and Beganovic also took to the track early, knocking the pace down into the 1m57s, and Bohra was then first into the 1m56s.

Braschi went fatest 12 minutes in, and spent a lengthy amount of time there before Hyderabad Blackbirds powered by MP driver Mari Boya found the pace to better him.

While the pace then moved sub-1m56s, the session one benchmark was not bettered and in total 13 drivers failed to match their morning laptimes, including 11 of the drivers who had been in the top 14 of the first hour of running.

That included Braschi, who topped session two with a 1m55.480s lap. Inthraphuvasak and Mini were 0.088s slower in second and third, putting them fourth and fifth overall in the day’s combined classification, with fellow improver Antonelli went fifth fastest in the session and sixth overall.

It put him 0.242s ahead of team-mate Nikita Bedrin, one of only two drivers to set their personal best lap then. The other was Kirill Smal, who had replaced Beganovic.

Joshua Dufek made it a session 1-2-3 for PHM, 0.580s behind, and Marti was the only other driver within a second of Barnard.

Brad Benavides and Aiden Neate were on top early, with Dufek and Bedrin leading the way before Barnard’s benchmark lap.