Five things we learned from FIA F3’s Spa-Francorchamps round 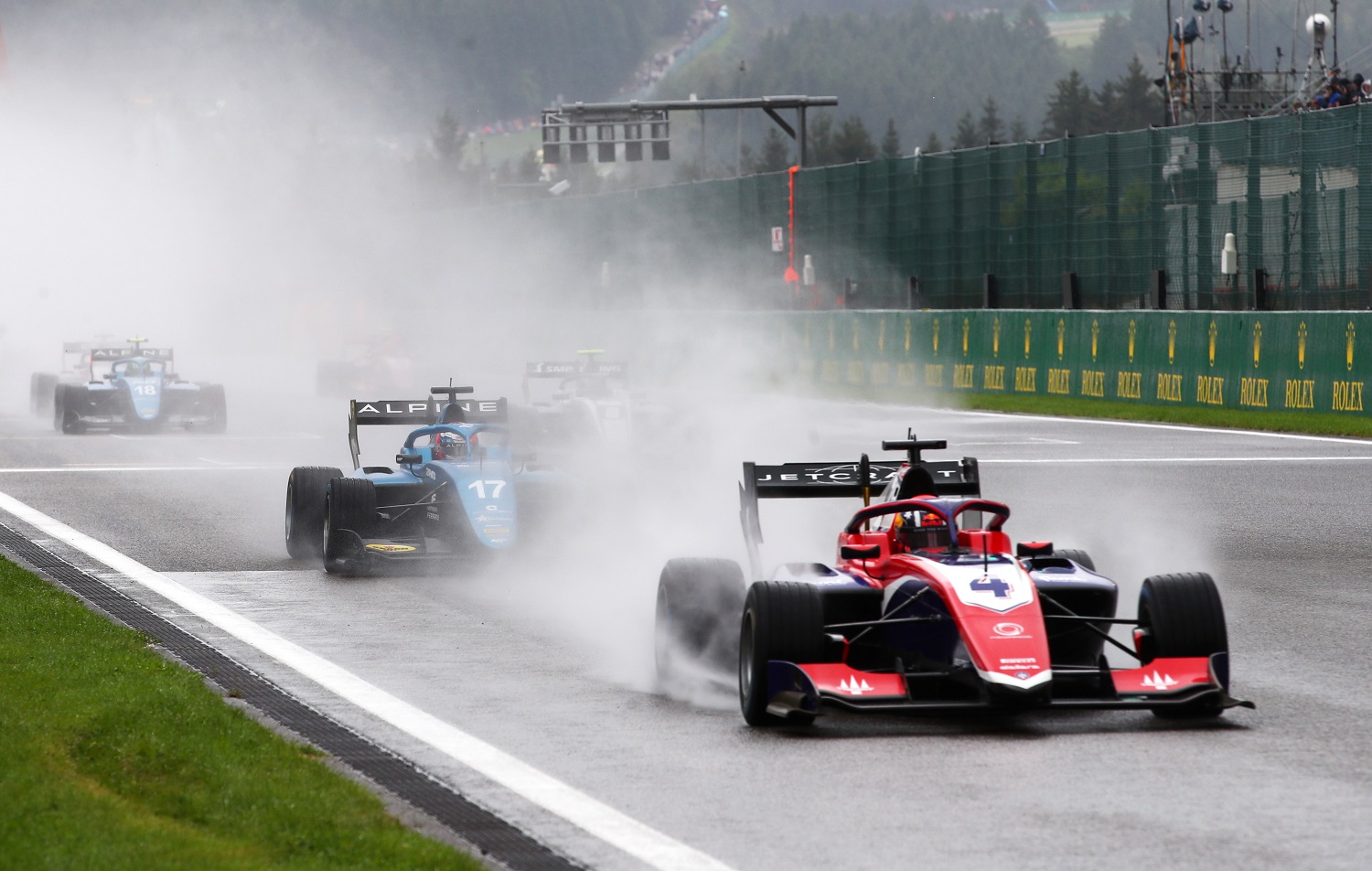 Two faultless performances in the wet conditions of Spa helped Jack Doohan to considerably reduce the gap to Dennis Hauger in the FIA Formula 3 standings, keeping intrigue in the championship fight

The extremely challenging conditions at Spa-Francorchamps led to shortened races and less wheel-to-wheel action than usual at the Belgian track.

Instead, we had things that don’t happen often, like a driver not wanting to gain positions, Prema having a bad weekend, and drivers openly accepting penalties for actions that normally lead to endless discussions.

It’s not over until it’s over

Trident’s Jack Doohan spent a lot of his off-track time this weekend stressing that he and his team had to maximise their potential if they wanted to beat Prema’s Dennis Hauger to the championship.

The pair came into the weekend separated by 63 points, and the Australian was able to cut that difference to just 25 points over the course of the Belgian GP, thanks to his strategy of making the most out of each opportunity.

“Obviously it’s only qualifying. We just have to keep pushing and keep going in this way and hopefully maximise the points from this weekend,” Doohan said at the end of Friday. “The package is quite strong here, so I just need to fulfil it, and hopefully bring home top results.”

Race one was pretty difficult for Doohan after he started from 12th due to reversed grid system.

“I didn’t want to take any risks for what could still have been a zero points position, or just a one-point position if I had gotten 10th.

“I had to be smart about my actions and prioritise races two and three.” 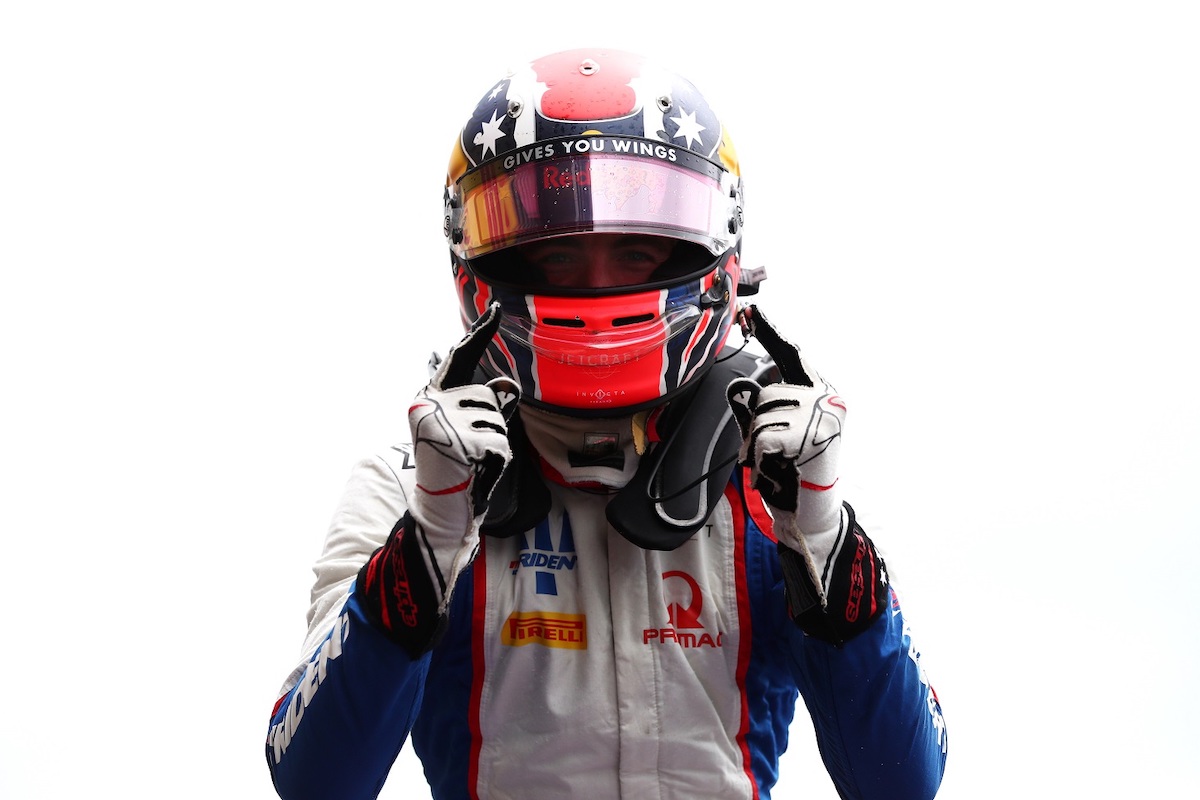 This left Doohan with zero points in the first race of the weekend, but with a pole position for race two which proved crucial to allow him to then dominate that race.

“I’m really happy to be able to capitalise on this morning’s sacrifice,” he said afterwards. “This morning was in difficult conditions, so the aim was just to not lose ground and to not gain ground, and to start from pole for this afternoon.

“I believed before the weekend, and I still believe, it’s never over until it’s over,” he added after taking 13 points out of Hauger’s championship lead in race two.

Despite having to fight Martins for half of the race, Doohan was able to convert his pole position into another victory in race three, reducing the gap to the amounts of points awarded in a Sunday’s race.

Asked what was the key to such a good weekend, Doohan said: “Just having faith, and believe in myself and the team that we can still fight for the title, and never giving up.”

Even the best can have a bad weekend

The comeback from the summer break didn’t go well for Prema. The Italian outfit managed to score just eight points after struggling for pace the whole weekend.

Things didn’t go as planned in practice, and it was even worse in a very difficult to read qualifying session that ended with all three Prema cars outside of the top 12.

“We struggled with the grip in general and couldn’t find the right confidence to push. We definitely have some things to work on for tomorrow,” said championship leader Hauger after qualifying. 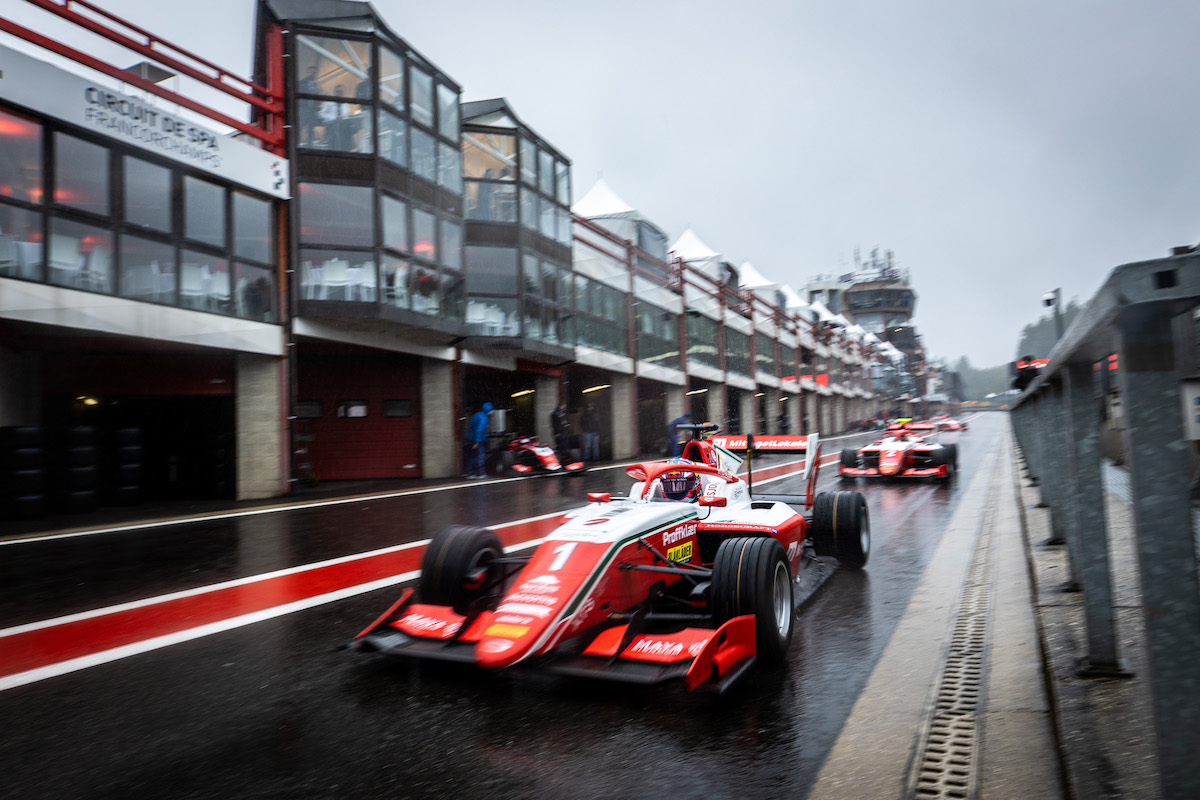 Arthur Leclerc sounded a bit more optimistic than the Norwegian though.

“It has been a difficult qualifying, not the results we expected but we have more pace than what we showed today.”

Unfortunately for them, the situation didn’t change much on Saturday morning, and none of the Prema drivers was able to make up any positions in race one.

However, the team was able to find some performance for race two, when Hauger and Leclerc moved forwards to finish inside the top ten.

“Race two was definitely a step forward compared to the first one. I managed to get up a bit and score a few but important points. Now we need to keep working on what we have to bring it forward for tomorrow,” stated Hauger in Saturday’s evening.

Despite not scoring any points, Olli Caldwell also enjoyed a much better second race.

“We made a good step for race two,” he said. “With slightly dryer conditions, the car felt much better, and we were able to fight. Unfortunately, we got set back by the safety car and the rain at the end, but we moved in a positive direction, which is good.”

Hauger and Leclerc finished eighth and 10th respectively in race three, which gave Prema five more points, an amount still far away from what they are used to.

However, the Norwegian stayed calm after losing a big part of the advantage he had built up before the summer break.

“He [Doohan] has had some bad races before, though, and I have just had a bad weekend. I will keep focused because I think we’ve got the pace to beat him.”

Colombo’s Hungary form was not a one-off 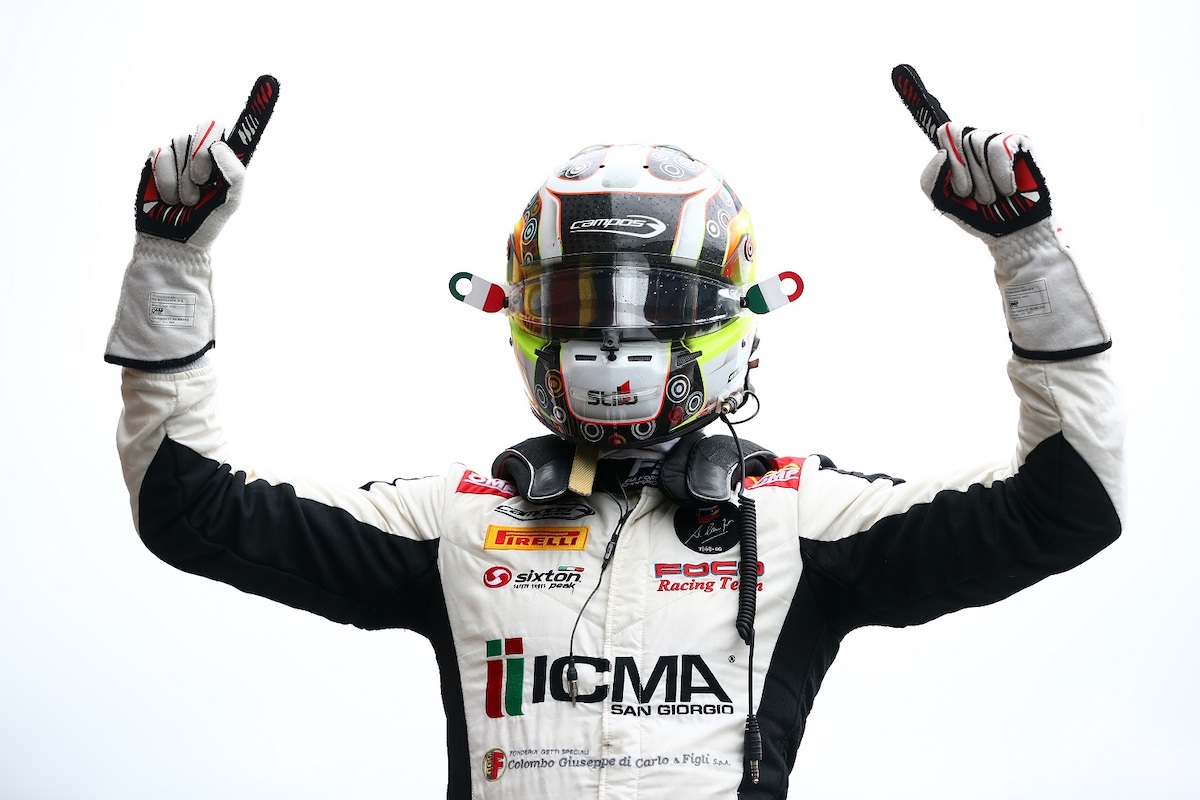 Campos Racing driver Lorenzo Colombo won race one at the Hungaroring from reversed-grid pole, only to have it taken away due to a safety car infringement.

One month later, the Italian repeated the process and this time he kept his victory.

Despite neither being able to qualify at the front nor taking points in race two and three, Colombo proved that he will not fade away in the middle of the pack if the opportunity arises.

The FIA F3 rookie made the most of his reversed-grid pole, and drove a phenomenal race to take the chequered flag 13.471 seconds ahead of second-placed Jak Crawford.

Colombo explained after the race how difficult the conditions were that he had to face in his way to the top step of the podium.

“For me let’s say at the beginning of the race, sector one was pretty wet, I mean in the straights there was so much spray.

“Considering also on the first formation lap I had some aquaplaning in the beginning, so I talked to my engineer a couple of times, ‘I think it’s a bit on the edge to start the race’ because we were not going full speed and we were already sliding in the straights. It’s not really comfortable when driving if you have some stuff like that.

“During the race, I think it got better and the track was just drying lap by lap, so I think we went in the right direction with the forecast.”

He also remarked on the importance of warming up the tyres in order to be fast straight away after the safety car, and praised the job done together with the team after qualifying on Friday.

“I think visibility is one of the best things to have in the wet, but I also think that there is something more [to the win]. I mean how to prepare the tyres, how to warm them up under safety car procedure that was going really slow. It’s also another key point to make the tyres work for the first laps.

“The massive work we have done from qualifying was to analyse the data in order to get the tyre up to temperature quicker and make them work faster in a quicker way and I think I showed that in the race. So we made a good effort on the driving analysis.”

Drivers know when they did something wrong 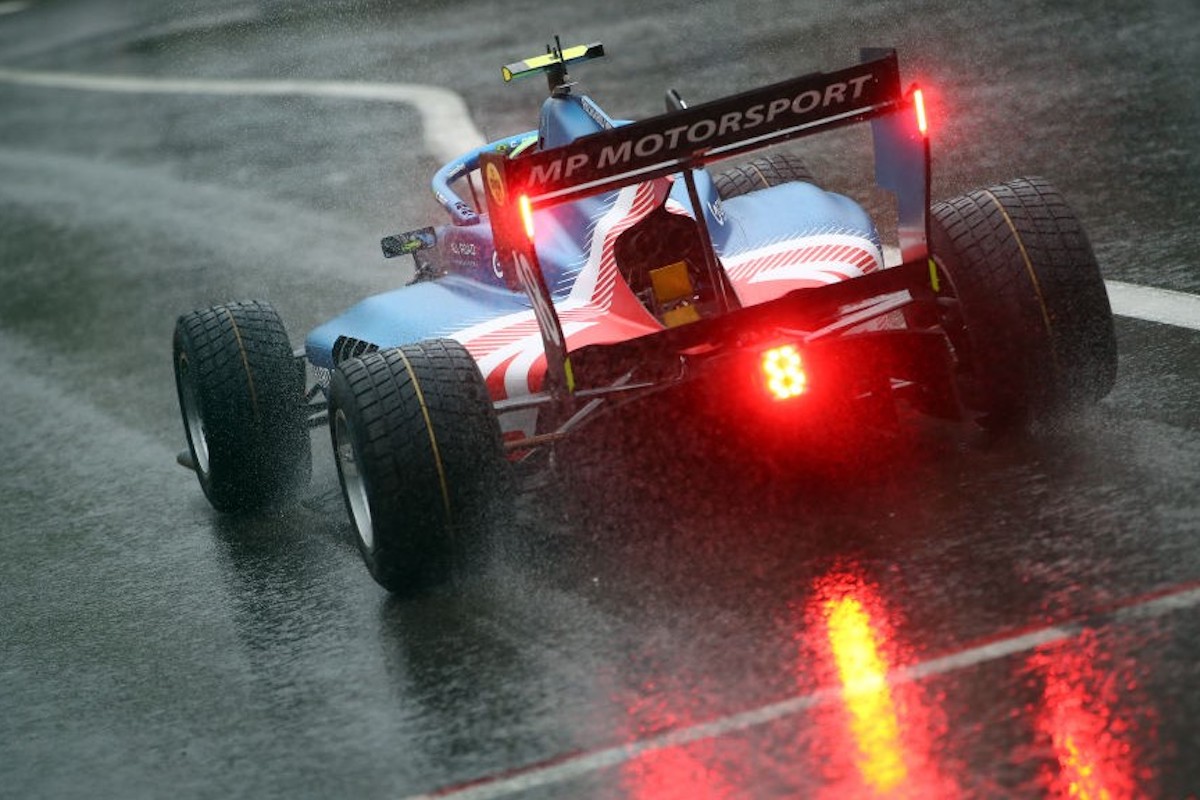 It is very common to hear drivers complain about penalties applied for exceeding the track limits, especially in those situations where that driver feels they’ve been forced to go off-road during an overtaking manoeuvre, but that wasn’t the case last weekend.

MP Motorsport’s Alpine Academy drivers Caio Collet and Victor Martins both found themselves going off the track and gaining places immediately after, and the stewards decided in both cases that they were in the wrong.

While both actions could have kicked off another discussion about whether track limits are overregulated, both drivers found to have gained a lasting advantage never considered the judgements to be unfair.

Collet received a five-second time penalty for cutting the apex at the top of Raidillon and then going driving the run-off on the right of the track in a manoeuvre that ended up with him passing Johnathan Hoggard, David Schumacher and Frederik Vesti.

Although Collet also explained that he took that line to avoid contact with any of the other drivers, the action was considered dangerous and, therefore, deserving of a penalty.

Martins’ case didn’t result in a time penalty, but in the Frenchman giving the position back after taking the lead of race three away from Doohan around the outside of Pouhon.

“At the end I think that if I will analyse everything, and see the footage, I will maybe understand why, but we have to leave it to the stewards. It’s not our job, we need just to fight each other with some space on the track,” said Martins after race.

These words by two of the championship front-runners showed they are able to look beyond their interests and recognise that they did something wrong. 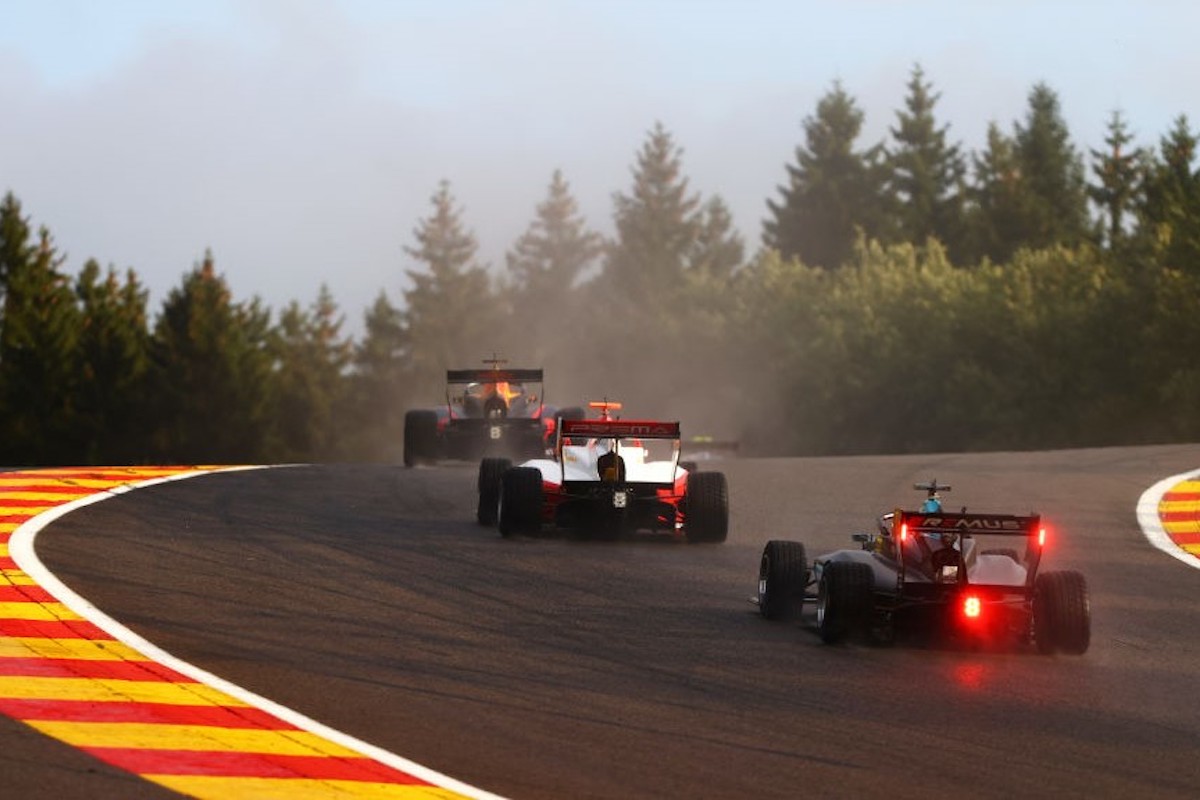 Visibility is everything in wet races

It had been a long time since all the races in a weekend took place on a wet track, but Spa’s unpredictable weather made up for that.

Races one and three both had to start behind the safety car, as visibility was very poor due to the amount of spray raised by the cars.

“I think that visibility in the wet is the most important thing to have, especially at the beginning because nobody had references so far,” said race one winner Colombo.

“In race one, in the first few laps I didn’t even see the brake point for Turn 5,” stated Schumacher when he was asked to compare races one and two.

“So, it was just basically blind driving, and just expecting where is the board, where can I start braking, so for me it was definitely easier this afternoon.

“The spray for me is the biggest thing, visibility is everything, so I’m always happy if I have it.”

Seeing how the Formula 1 race panned out on Sunday, the F3 paddock could be grateful it got three near full-length races on such a wet weekend at Spa.