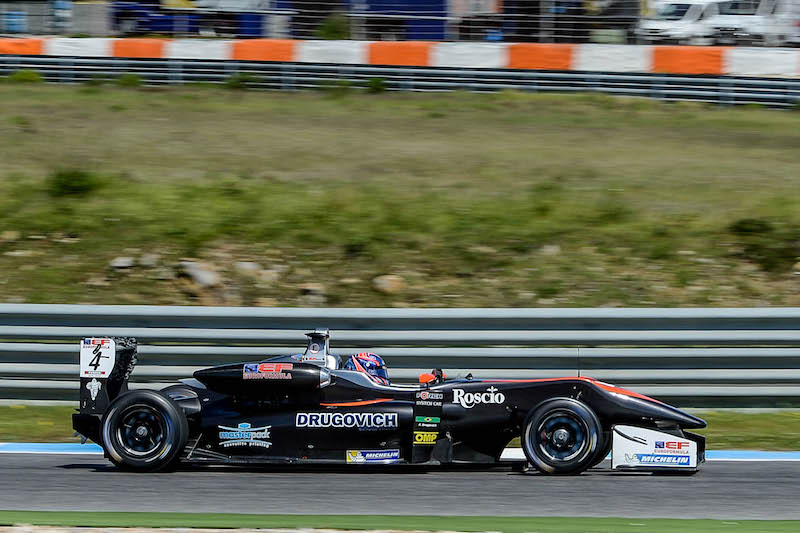 RP Motorsport’s Felipe Drugovich?took victory by over six seconds from pole position in the opening race of the 2018 Euroformula Open season.

The 20-year-old Brazilian had a good start off the line and led for all 19 laps of the race, with a gap of 6.690s separating him and second-placed compatriot Matheus Iorio.

Iorio, who finished third in the opening race of the season last year at Estoril, was also not troubled throughout the race. He kept the gap down to around one second between him and Drugovich?during the first half of the race but then started to fall back.

His Carlin team-mate Cameron Das got off to a great start, starting sixth and making it up to fourth by the time he exited the first corner on the opening lap.

On the second lap the American driver was able to get by Campos Racing’s Marcos Siebert for third and started to pull out a gap. By the end of the final lap were much closer however, with just 0.102s separating them at the finish.

Winter Series winner Bent Viscaal of Teo Martin Motorsport was further down the road in fifth, but also had a gap of over three seconds to sixth-placed Lukas Dunner.

One of Drugovich’s team-mates at RP Motorsport Guilherme Samaia was involved in a scrap for seventh place with Jannes Fittje, with the pair trading the position back and forth multiple times over the final two laps.

Further behind them on the road was Campos’ Yves Baltas, who was able to make his way from a starting position of 14th up to ninth position.

There was a battle for 10th in the second half of the race that involved RP Motorsport’s Michael Benyahia, Aldo Festante and Alex Karkosik alongside Drivex School’s Christian Hahn. An aggressive battle started between Karkosik and Festante in the middle of the race with Hahn not too far behind.

However Benyahia, who was gradually making his way through the pack after starting the race in last, was able to move up by the end of the race to take 10th, just under one second behind Festante.

Fortec’s Petru Florescu started the race in eighth, but on more than one occasion went wide and through the gravel and grass. His final trip damaged his front wing on lap nine which brought him into the pits.