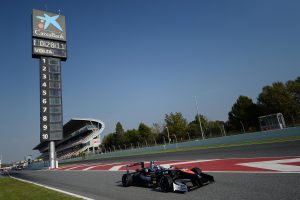 Felipe Drugovich took a remarkable pole position at Barcelona on his Euroformula Open debut, standing in for champion Harrison Scott at RP Motorsport.

The Brazilian was second fastest in practice on his first visit to the circuit, and stepped up his game in qualifying to go fastest by 0.236 seconds from Nikita Troitskiy.

Troitskity lines up ahead of Devlin De Francesco and Alex Karkosik, all three of whom are looking for their first EF Open victories after multiple podium finishes this season.

Ameya Vaidyanathan and Jannes Fittje will start sixth and seventh, and both will be fighting over third in the standings in the remaining two races.