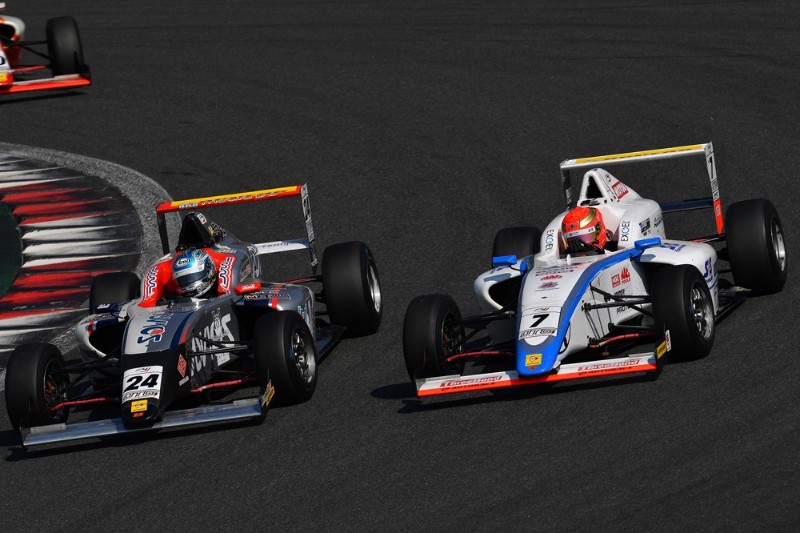 Having been beaten to victory twice last time out at Suzuka, Sato got back to winning ways with a lights-to-flag win in race one. He got off the line well as title rival Togo Suganami (OTG Motor Sports) fell from second to fourth before the safety car was deployed.

When the race got back underway it was simple for Sato, who kept enough of a gap in hand over the recovering Suganami. Championship returnee Mizuki Ishizaka, driving for Bionic Jack Racing, completed the podium.

Race two wasn’t as simple for Sato. While he started from pole again, a slow start pushed him down to third place on the opening lap.

By lap four of 14 Reiji Hiraki had taken the lead of the race ahead of Suganami, who was shortly passed by Sato.

Over the final five laps of the race Sato and Hiraki put on a great battle and the lead changed on multiple occasions. It was Sato who was able to make a move stick on the final lap to take his fifth win of the season.

Manuel Sulaiman secured the 2018-19 NACAM F4 title at Mexico City and won the final race of the season.

While Jak Crawford won the opening two races of the weekend, second place for Sulaiman in race one meant that he only needed to win one of the final two races to clinch the title. Sixth place in race two however ended up being enough for Sulaiman to become champion.

Crawford’s team-mate Nicholas Christodoulou put in a good performance to finish on the podium in all three races, claiming second in race two and two third places. Pablo Perez de Lara however pipped him to third in the championship after a third and fourth-place finish.

Over in Russia, Pavel Bulantsev extended his lead in the SMP F4 Championship after winning both Autodrom Moscow races.

Artem Lobanenko, his closest title rival going into the round, was just behind him in race one. However, Lobanenko could only come up with fifth overall in the second race of the weekend.

By finishing third in race one and then second in race two, Alexey Nesov has now taken second in the standings.