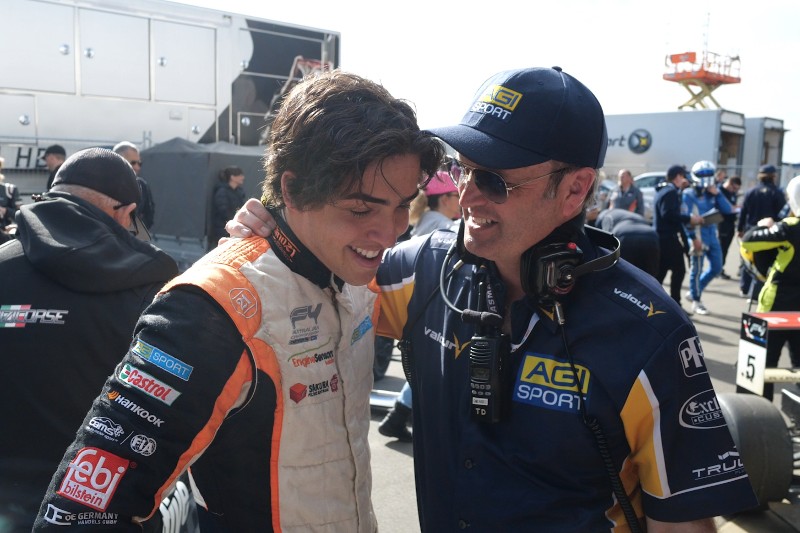 The AGI Sport driver was the man to beat at Pukehoke Park Raceway, where he brought his season victory tally up to 14.

Title rivalling team-mate Ryan Suhle set the pace in qualifying, and kept the championship fight alive by beating Ojeda in the closest finish in Australian F4. For 12 laps the pair battled, and on the last lap Suhle pushed extra hard through the chicane to try to create a gap.

He ended up overdoing it, and when his engine cut out on the run to the finish it looked like he would lose out on a third win of the season. He just held on, taking victory by 0.0891 seconds.

One race later Ojeda was receiving all the plaudits though, having wrapped up the title. Lochie Hughes started that race from the front, with the track slightly greasy after overnight rain. Multiple drivers ended up running of track, handing a free pass to Ojeda and Suhle to make it into first and second. Suhle couldn’t do enough to beat his team-mate, who didn’t have the title on his mind until the final corner.

They did battle once again in the final race, this time with Ojeda starting from pole. They ran a little closer this time, with Ojeda prevailing by 0.9338s. Suhle’s second place meant he also finished a comfortable second in the standings.

Team BRM’s Aaron Love finished the first race on the podium, but faded thereon. His third place in the standings was not under threat though, with team-mate Cameron Shields absent from proceedings.

Third place in race two helped Hughes take fifth in the standings, and also the second best rookie behind Ojeda.

With similar size grids to Australia, the Spanish championship came to a close end at Navarra, as MP Motorsport driver Amaury Cordeel just held off Drivex School’s Javier Gonzalez for the title.

Guillem Pujeu, who won last time out at Jerez, moved onto the tail of championship leader Cordeel with victory in race one. Cordeel struck back with pole and victory in the second race, but then finished 11th and seventh in the remaining two.? Pujeu failed to seize the initiative, taking just one sixth place, while Gonzalez took two poles, a win and a fifth place after two top four finishes in the first races.

The trio were separated by just a handful of points afterwards, with Argentinian Franco Colapinto jumping up to ninth in the standings for Drivex after winning the final race of the weekend.