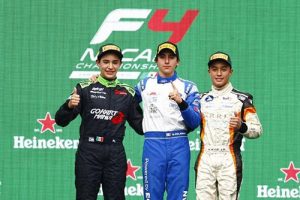 The 2018-19 NACAM F4 season started at Mexico City on the undercard of the Mexican Grand Prix, and resulted in two different winners.

Scuderia Martiga EG returnee Kory Enders took pole for the first race, and was favourite for victory having won the last three races of the 2017-18 season. The American wasn’t quite so lucky though, ending up a distant fourth as British F4 regular Manuel Sulaiman took his first car racing win for Ram Racing. Telcel RPL Racing’s Pablo Perez de Lara finished second, 4.347 seconds behind, with Noel Leon continuing on from his 2017-18 podium cameo in third.

In race two events favoured Enders far more, and he took victory by a dominant 8.138s over Sulaiman, who leaves Mexico City with a six point championship lead. Enders’ fellow American and team-mate Jak Crawford was just behind in third, ahead of Leon and Perez de Lara. His RPL team-mate Mateo Llarena also did well, taking an eighth and a seventh.

The Frenchman headed Kane Shepherd in the first four races, each between the range of three to six seconds. Muizz Musyaffa, the third of the three title contenders, completed the podium on three of the encounters with Antoine Potty doing so in race two.

The penultimate race of the weekend was Ghiretti’s most dominant, putting 7.950s between himself and Musyaffa, who failed to finish race two after colliding with a stalled car and causing the race to be red flagged. It took just a few corners in the fifth race for Ghiretti to take the lead, while two grassy moments meant Shepherd ended a distant sixth, with Musyaffa and Alister Yoong finishing second and third.

Shepherd struck back in the final race of the weekend, triumphing in an on-off battle with Yoong. The closest they got was when Yoong attempted a move at Turn 3 and ended up making contact with the leader. Both survived and Shepherd took his fifth career win by 1.948s. Musyaffa finished third with fastest lap, ahead of Ghiretti and Potty.

Home hero Sandy Stuvik, 2010 Asian Formula Renault and 2014 Euroformula Open champion, was also on track but only finished once.