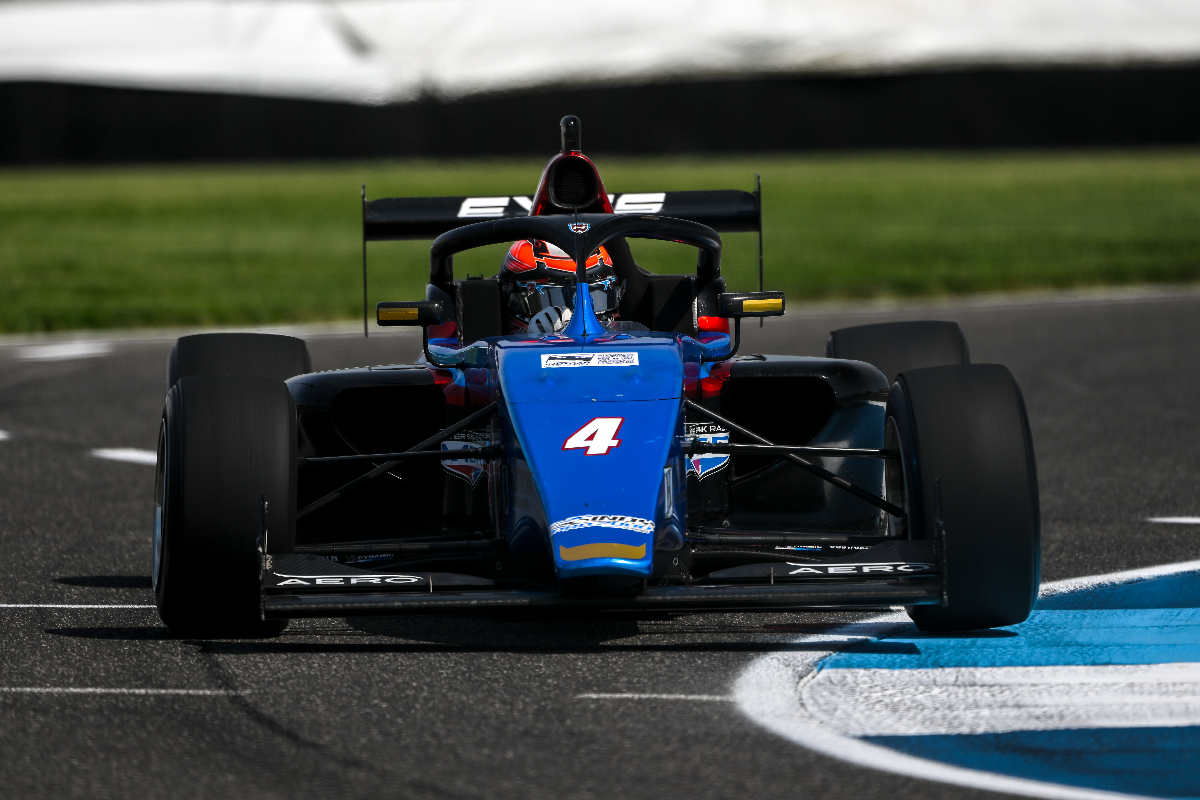 The first team to remove itself from contention was Exclusive Autosport, with had its driver Louis Foster second on the grid behind Turn 3 Motorsport’s Jonathan Browne and also had Jack William Miller in fourth who is driving for the Miller Vinatieri Motorsports team that has struck a new alliance with Exclusive.

Poleman Browne held his lead on the rolling start but then went too deep into turn one and Foster tried passing around the outside at the direction change of turn two. He had got marginally ahead but then Browne had a wobble of oversteer at the exit and made slight side-on contact with Foster which sent him into a spin.

Most drivers were able to avoid Foster, and Miller’s initial swerve kept him out of the way but then as he slowed he ended up ridind over the top of Foster and landed on his halo. Both drivers were uninjured.

Browne led through the subsequent caution period ahead of Colin Kaminsky and Eves, who had started ninth on the grid.

Eves passed Kaminsky at the restart, and then inherited the lead as Browne was handed a drive-through penalty for his contact with Foster. Kaminsky got back past Eves, only to overshoot turn one and take the escape road and give his rival the chance to break away and claim victory and the points lead.

Kaminsky dropped to sixth, with single-seater rookie Salvador de Alba rising to second for JHDD. He was fighting with pre-race points leader Nolan Siegel and Enaam Ahmed until Siegel collided with his DEForce Racing team-mate Kiko Porto at the corner after the back straight.

Ahmed then had third but was passed by Yuven Sundaramoorthy, who pressured de Alba while also fending off his own Pabst Racing team-mates Kaminsky and Jordan Missig. The Pabst trio did avoid colliding, but Missig dropped to eighth behind Juncos Hollinger Racing’s Reece Gold and the sinking Ahmed, and Porto.

Lindsay Brewer profited from a dramatic to finish a close ninth on her debut, while Browne came home a very distant 10th.