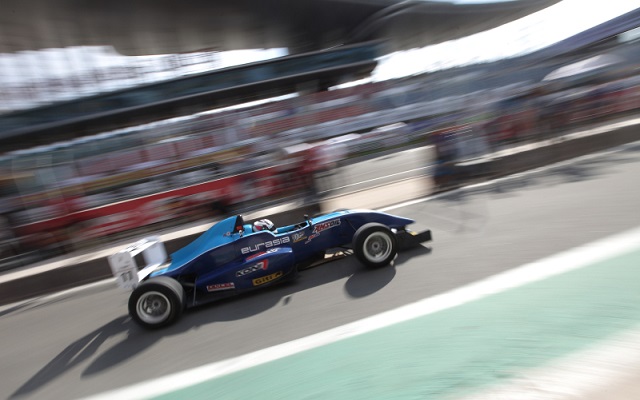 Yuan, 26, did a full campaign in the series in 2013 with the Star Racing Team and finished ninth overall (second in the China Driver Class) with a best result of fifth at the season opener in Zhuhai. He dovetailed the FMCS campaign with a season in the Asian Formula Renault series in 2013 with Champ Motorsport, finishing second in the Asian class with two wins at Shanghai.

Prior to 2013, Yuan participated in the final round of the 2012 Formula Pilota China season at Sepang, though he failed to see the checkered flag. He had begun his national-level racing career a year earlier with an eight-place finish in the China Touring Car Championship’s 1600 Turbo class.

“We actually wanted Bo to race with us last year as we could see his potential after testing with us”, said Eurasia’s Mark Goddard. “However VW chose him as a scholarship driver and last year this meant he had to join their nominated team. This year the Star Academy driver can choose his team so it was a natural for us to get together. He has been performing very well in testing this year and I am sure he will work well with Pu Jun Jin as they vie to be in the top three on a regular basis.”

Jin Pu, 29, will continue his association with Eurasia, with whom he finished 8th in the standings last year, as he topped the China Driver Class ahead of Yuan, having also recorded a best finish of fifth at Zhuhai. He picked up a podium in his only outing at the Asian Le Mans series last year with Craft Racing, partnering Dan Polley and 2010 Formula BMW Pacific champion Richard Bradley. In 2012, he had finished 7th in the Volkswagen Scirocco R-Cup China.

“We are very happy that Kevin has chosen to stay with us this season and we have been impressed with his determination to succeed? stated Mark Goddard. ?He is fitter and even more focused this season and I am sure he will be a podium contender this season. He competed with us In the final round of the Asian Le Mans series at Sepang last December in LMP2 and despite the large step in performance he acquitted himself really well and I am sure that has also given him more confidence for the coming season.”

Formula Masters China kicks off on Friday with pre-season testing at the Zhuhai International Circuit.

The class of 2014: Seven karting graduates to watch this year