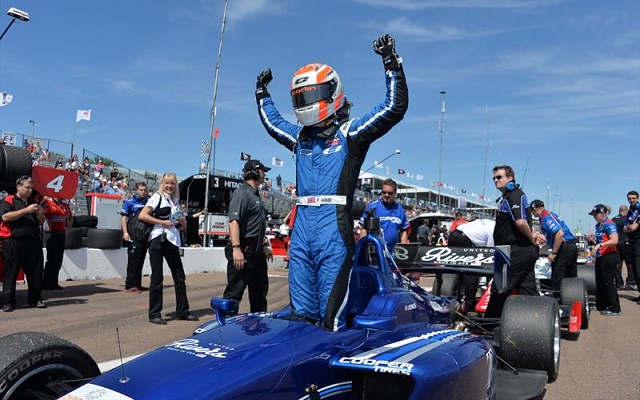 Carlin Racing’s Ed Jones remains the only driver to win an Indy Lights race with the new 2015 car.

The Emirati claimed his third straight win in the only race at Long Beach, California, after starting fourth on the grid.

Jones’ closest rival heading into the weekend was Jack Harvey but the Brit’s victory bid was undone into turn one when Juncos driver Kyle Kaiser braked late and took out Harvey’s rear wing.

With Kaiser’s teammate Spencer Pigot having to take avoiding action and ending up fifth, Felix Serralles moved into the lead of the race with Jones assuming second.

A caution was thrown for the turn one incident and, when the green flag waved again, Jones passed Serralles on the restart.

The Puerto Rican briefly kept up with the race leader, but ultimately saw Jones build up a safe advantage.

Behind them, Pigot made quick work of Scott Anderson for fourth, before closing in on another SPM car of RC Enerson.

The USF2000 runner-up put up a good fight, but was finally overtaken by Pigot, who then negotiated his way past Serralles as well.

It was then that Harvey, having left the pits several laps down with a new front wing, collided with Juan Piedrahita to bring out the second caution of the day.

At the subsequent restart, Pigot came close to taking the lead off Jones, but the Emirati held on.

The Juncos driver stayed within a second off the lead during the final stint of the race and had another go on the last lap, but ultimately had to do with second.

Anderson recovered from a spin to take sixth, ahead of Ethan Ringel and Piedrahita.

It was a miserable day for usual Lights frontrunners Andretti Autosport, with Matthew Brabham retiring after a few laps and Shelby Blackstock enduring car troubles and finishing several laps down.