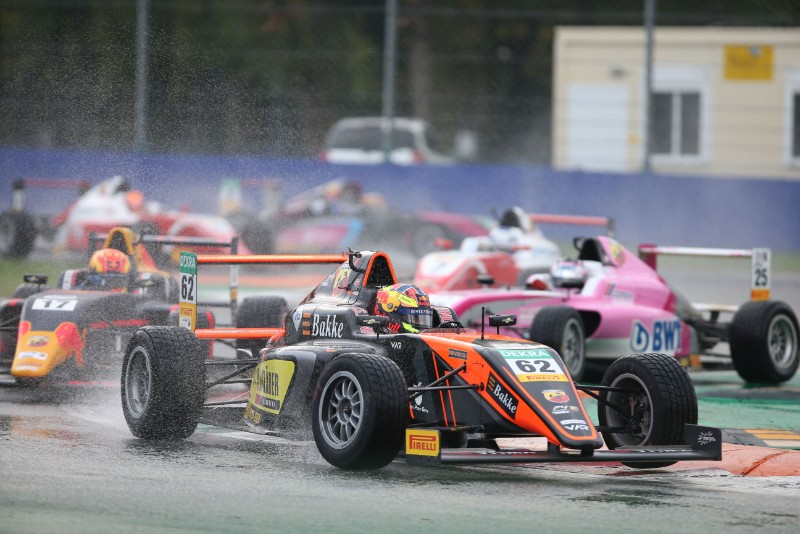 Italian Formula 4 champion Dennis Hauger ended the 2019 season with a triple win at a wet Monza.

Red Bull junior Hauger started the first race from pole, but the wet conditions meant the Van Amersfoort Racing driver left the field behind the safety car for the first few laps.

Once the safety car did depart it wasn’t long before it was required again, but whenever the track was free to race on there was nobody who could match Hauger’s pace.

Bhaitech’s Mikhael Belov, Prema’s Gianluca Petecof and VAR’s Lucas Alecco Roy fought over second place behind, until Petecof spun at the first chicane. This enabled Belov to pull away up front, with Petecof’s team-mate Oliver Rasmussen also benefiting to pass Roy for third.

There was another safety car period after Red Bull junior Jonny Edgar span off at Parabolica, and on the restart Belov came side-by-side with Hauger. He failed to make it through, as multiple drivers skipped across the first chicane behind him.

Belov made his own error later on but remained in second, while Roman Stanek threw away a strong result with an off at the Lesmos. Rasmussen ended up beating Mucke Motorsport’s William Alatalo to third, with Roy slipping to sixth behind Alatalo’s team-mate Joshua Duerksen.

Jenzer Motorsport’s Edgar took pole for the second race, but immediately lost the lead to Hauger. Edgar impressively reclaimed two of the three places he lost by the first chicane, but was shuffled back to third by Belov at Parabolica.

Edgar lost further places as the race went on, while Hauger took another comfortable victory ahead of Belov. Prema’s Paul Aron battled his way up to third, ahead of Alatalo and Petecof.

Hauger took two thirds of race three before passing Edgar for the lead, as chaos happened behind.

Belov rearended Alatalo at Ascari and knocked himself out of the race, Duerksen span at the first chicane and was ridden over the top of by Petecof in a four car crash, and Edgar managed to crash into Alatalo twice later in the race once he conceded the lead.

Coming through that mess to complete the podium, despite their own mistakes, was Aron and Stanek. Rasmussen and championship returnee Ian Rodriguez were fourth and fifth after Roy jumped across the first chicane on the final lap.