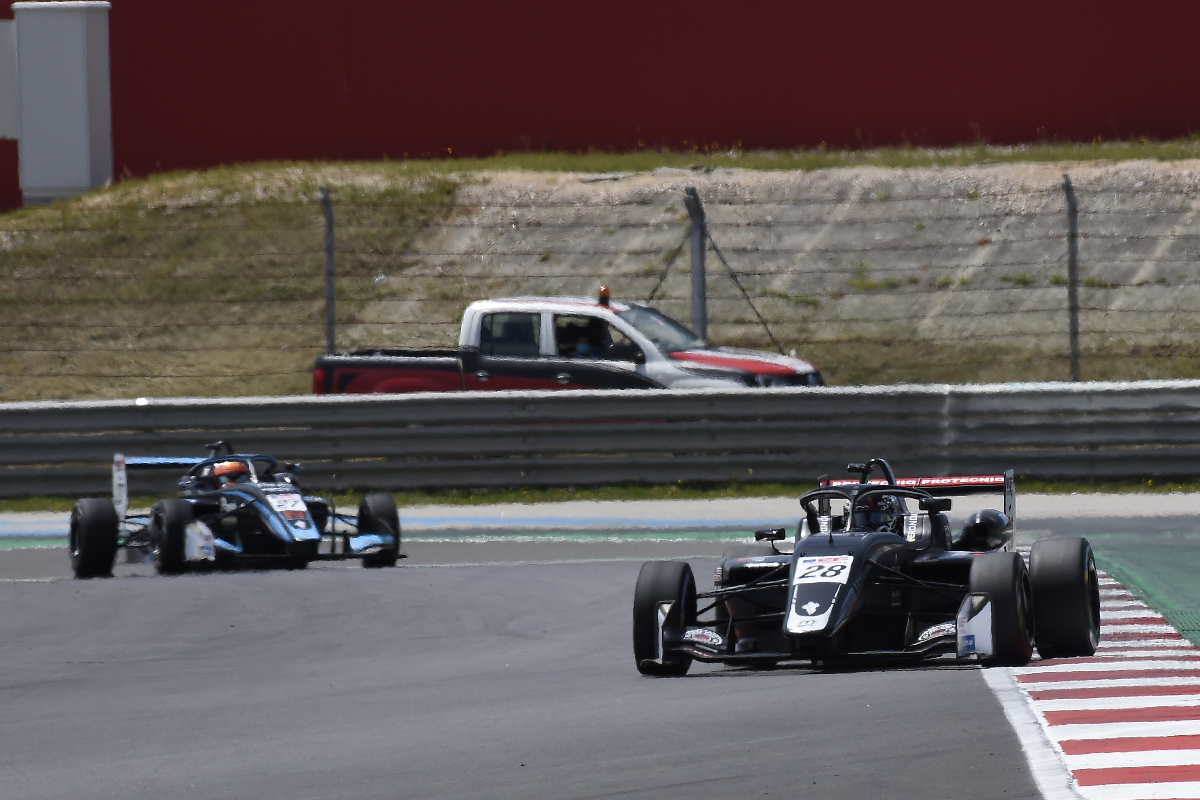 Cameron Das made it three wins from three at the Euroformula season opener with victory in Sunday’s race running just before the Portuguese Grand Prix.

Das trailed Van Amersfoort Racing’s polesitter Andreas Estner on the opening lap, and picked the outside line for the run down to the first corner for lap two. An overtake was made, although he went significantly wide off-track through the next corner to get it completed and Estner immediately came under threat from CryptoTower Racing Team’s Louis Foster behind.

Foster took longer to clear Estner, making his move on lap four of 19 and almost being followed through by team-mate Nazim Azman. Instead Azman made light contact with Estner that delaminated the German’s rear-left tyre and earned himself a five-second penalty.

Drivex School’s Enzo Trulli also made an opportunistic pass to get by all three in one go and occupy third place while Double R Racing’s Joshua Mason moved into the top five as Estner plummeted down the order.

Das went on to take an 11.923-second victory over Foster, while Trulli didn’t have the pace to hold off Azman but once back behind he didn’t drop back too far and was promoted back up to the final podium spot when Azman’s penalty was applied.

Casper Stevenson (VAR) finished sixth, while Motopark’s debutant Jak Crawford charged from 13th on the grid to finish seventh. The American only turned 16 on the day of the race, meaning he was not allowed to compete in Saturday’s action, and the Red Bull junior made some impressive overtakes to climb up the order.

Rafael Villagomez finished eighth in his VAR-run car after being tracked down by Crawford, while the lower positions were intensely fought over in the second half of the race.

Zdenek Chovanec (Double R) and Filip Kaminiarz (CryptoTower) took their fight for ninth all the way to the chequered flag, with Chovanec prevailing by 0.218s in a sprint to the finish.

Enzo Scionti (Drivex) and Vivien Keszthelyi then fought side-by-side for 11th place over several laps, and their battle was ended by Keszthelyi spinning around when she lost the rear of her car.