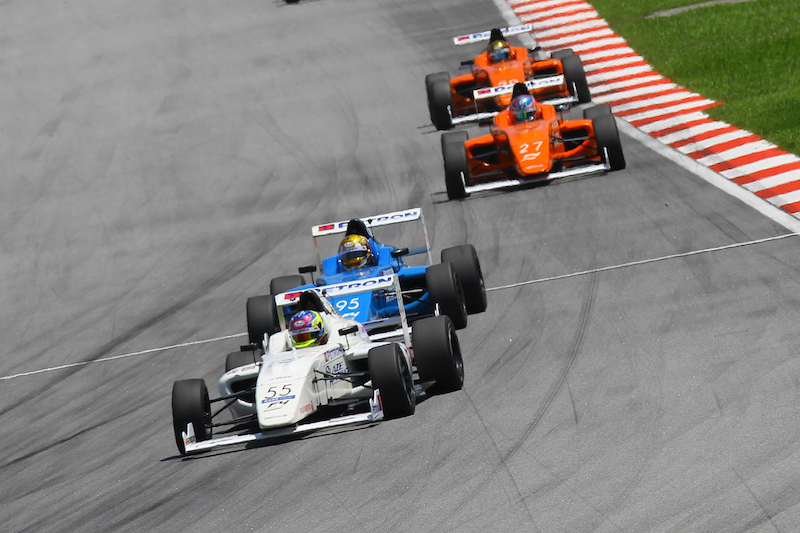 Daniel Cao closed in on the 2017-18 Formula 4 South East Asia title at Sepang, matching the series win record in the process.

The Chinese driver took his ninth victory of the season in the first race, putting him 136 points clear of his closest rival.

Cao claimed podiums in the second and third races, and was in contention for another in the fourth race until mysteriously slowing down on the final lap. He still managed to finish eighth though, and followed that up with a sixth and a third in the final two races.

Kane Shepherd, the only other driver to contest every race this season and Cao’s sole title rival, struggled with pace and misfortune in the first three races. Overnight the results improved though, and he won two of the three Sunday races. This made no impact on the standings though, as he was already 100 points clear of Ugo de Wilde, the next best driver to contest the fourth round of the championship.

de Wilde only won one race, after triumphing in four of the six held at Buriram last month, but was still able to leap up to third in the standings, despite contesting only half of the season.

The two other winners in Sepang were Sri Lankan Eshan Pieris and Malaysian Mitchell Cheah.

Pieris, who also contested the first round of the season, was the surprise pacesetter in qualifying but wasted his first pole position of his career by colliding with Shepherd at Turn 1 on the first lap. Aaron Love inherited the lead and looked set to win until an error at the exit of Turn 4 allowed Cao, who had been hounding Love, through.

Victory for the Pieris came a race later, with Japanese karting graduate Hibiki Taira and Cao completing the podium.

Shepherd looked set to win the third race until a disastrous final lap safety car restart. Cheah stole the lead and victory, with Cao and Love completing the podium. Alister Yoong, son of former F1 driver Alex, finished a surprise fourth, but only after colliding with de Wilde at the restart and putting the Belgian out of the race. Shepherd crossed the line in eighth, the last person on the lead lap.

Both Shepherd and de Wilde made up for it by finishing 1-2 in the fourth race, with de Wilde going one better in the fifth encounter.

The final race of the weekend went Shepherd’s way, his second win of the season, with Taira and Cao completing the podium.

This article was edited after Formula 4 South East Asia revealed that the February 3-4 round was not in fact the final round of the season, and that there would be a fifth round of the season scheduled for April 13-15 at Sepang International Circuit after the cancellation of two rounds earlier in the season.