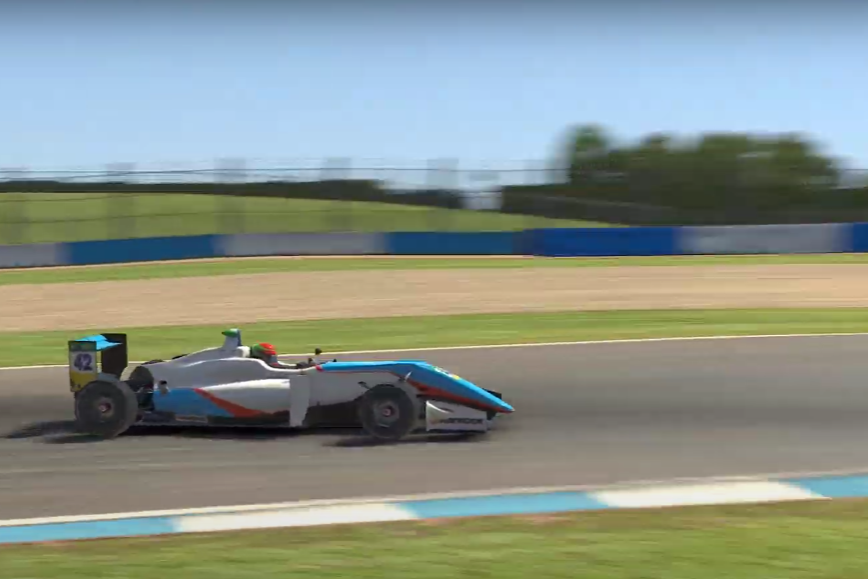 Denes was beaten to overall pole by Formula 4 South East Asia racer Muhammad Ibrahim, and they were put in different heats.

Ibrahim dominated his heat from pole, with 2019 Lamborghini Super Trofeo World Final runner-up Sandy Mitchell claiming second from ex-DTM driver Dani Juncadella when he made an error and went off track.

Alex Connor and Sauber junior Miguel Costa were fourth and fifth, after Mercedes-Benz junior Paul Aron span off and a lap one crash at McLean’s wiped out four of the frontrunners.

In heat two it was Denes who dominated, beating junior karter Kacper Sztuka and Former Formula Renault Eurocup racer Ramez Azzam. Nico Varrone picked up damage after one lap, with his hobbled car then being struck by Yves Baltas who got catapulted into the air.

Both somehow made it to the pits, and 10th place for Baltas meant he qualified for the feature race. British Touring Car Championship racer Daniel Rowbottom and Raoul Hyman came fourth and fifth, while Varrone beat former BTCC ace Mike Epps to 12th after the Briton had a conflict on lap one with Red Bull junior Liam Lawson.

His Red Bull stablemate Jak Crawford controlled heat three ahead of Formula E driver Oliver Rowland. Bart Horsten briefly challenged Rowland before crashing, and DTM-bound Ed Jones was handed one of iRacing’s slowdown penalties that put him out of contention.

A messy consolation race to decide the back rows of the feature race grid was won by Horsten. Johnathan Hoggard was second, ahead of Joe Turney, 2018 Britcar champion Matt Greenwood and Epps.

Ibrahim headed Denes on the feature race front row, but the Indian’s victory hopes were dashed by a slowdown penalty on lap one. Denes gratefully took the lead, and had the pace to stay comfortably ahead of Crawford for the rest of the 10-lap race.

Sztuka’s lap one pass on Mitchell earned him a third place he would not let go of, and left the GT racer to dispute fourth with Rowland. He made his move early on, but Mitchell stuck to his gearbox and tried reclaiming the position late in the race. In the end, Rowland held on by just over a tenth of a second.

Ibrahim and Azzman were sixth and seventh, with big crashes knocking out much of their opposition. Juncadella was forced on to the grass down the pit straight by Ibrahim not long before crashing, Connor and Bearman had a collision that also caught out Malin, and Bearman then had a second crash with former BRDC British Formula 3 racer James Pull.