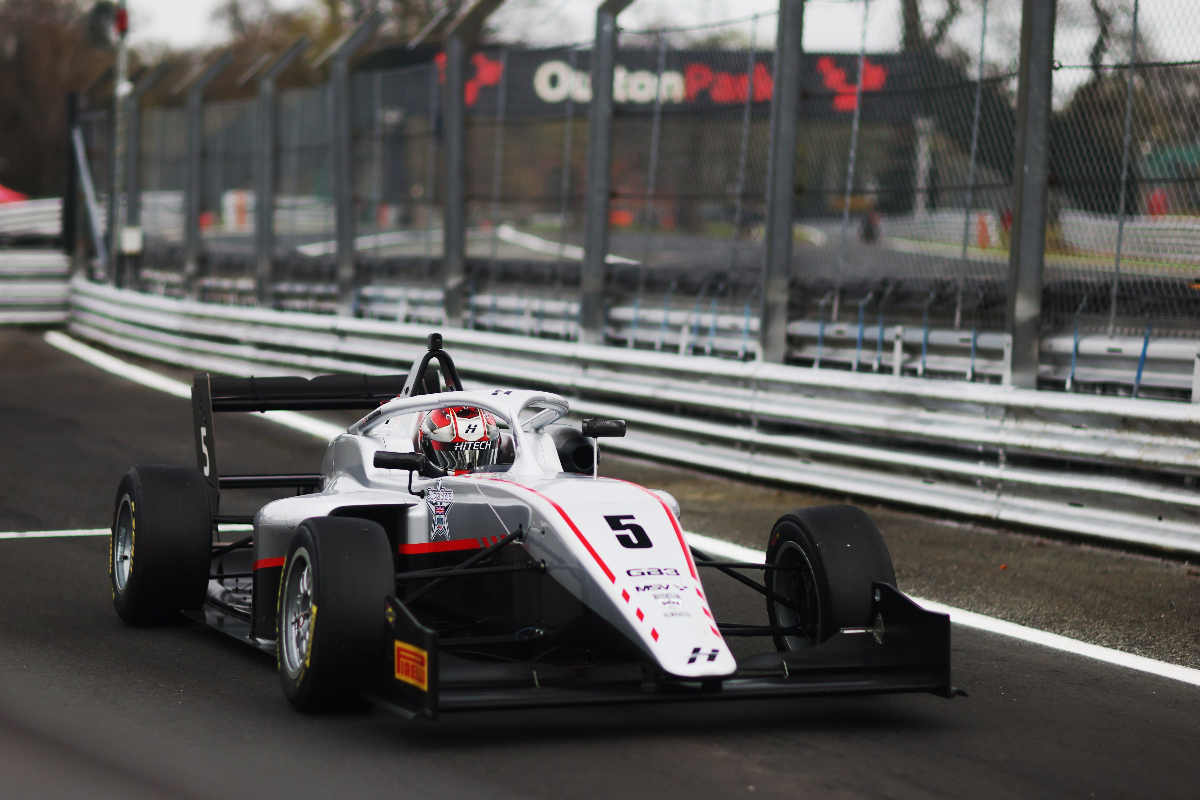 Hitech GP’s Luke Browning was fastest on the second day of pre-event testing for this weekend’s GB3 season opener at Oulton Park.

Browning both of Friday’s sessions ahead of Fortec Motorsports’ Joel Granfors, whose Thursday benchmark was bettered by 0.128 seconds during the morning.

Carlin’s Callum Voisin led the way until 15 minutes remained of GB3’s first session of the day, as Granfors bettered him with a 1m28.758s lap. But Browning then put in a 1m28.601s with seven minutes to go. Carlin’s Roberto Faria was third, ahead of Chris Dittmann Racing’s McKenzy Cresswell and Voisin.

Most of the field did not improve in the afternoon session, which was interrupted by a red flag due caused by an off for JHR Developments’ Matthew Rees.

Browning was fastest with a 1m29.583s before the stoppage, and there was a flurry of activity when action resumed with 10 minutes remaining. Granfors edged Browning’s best from the second morning session by 0.014s, before Faria went fastest with a 1m29.460s.

Granfors responded to go fastest again, before Browning posted a 1m29.255s. Behind Faria were team-mates Voisin and Javier Sagrera.

Rees’ session one time was good enough to place him sixth overall, with the top 15 drivers separated by less than a second. Hillspeed’s Nick Gilkes was the only driver to improve in the afternoon, but remained in 20th. Mikkel Grundtvig only registered laptimes in session two and was 21st overall.

Walker and team-mate Jack Sherwood exchanged the fastest lap early in the morning session, before Taylor went fastest approaching the halfway stage. His team-mate Elias Edestam then went almost 0.5s quicker inside the final 10 minutes, but Taylor snatched back first place at the chequered flag.

Jarrod Waberski led the way for Kevin Mills Racing at the 15-minute mark of the session two. Walker set a 1m35.920s inside the final 10 minutes, and improved further to go quickest by 0.8s from Adestam.

Taylor was the only driver to not improve in the afternoon, but ended up second overall, 0.689s adrift of Walker. Edestam was third ahead of Waberski and Sherwood, the trio within one second of the day’s pace.

Graham Brunton Racing took part on Friday, with a third driver running alongside Logan Hannah and Chloe Grant in the morning, but all three did not record their laptimes. Hannah was ninth fastest in the afternoon.