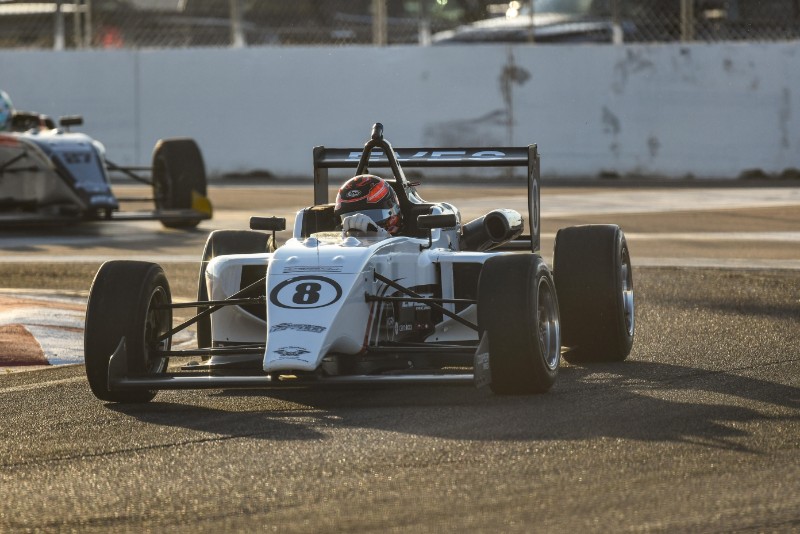 Braden Eves made it two wins out of two in the USF2000 season-opener in St. Petersburg after a last corner crash between Darren Keane and Christian Rasmussen.

Rasmussen immediately started challenging for the lead, pulling an audacious move on Keane on the opening lap while Eves? start went from bad to worse as he briefly lost third to Legacy Autosport’s Colin Kaminsky. Once he reclaimed the position, Kaminsky started dropping down the order.

Keane reclaimed the lead on lap three, and had to fend of Rasmussen for several laps before yellows were brought out to clear Jay Howard Driver Development driver Christian Bogle’s car. His team-mate Matt Round-Garrido also had a less than ideal race, getting an early drive-through penalty.

In the final segment of the race the top two pulled away, and at the final corner on the last lap, Rasmussen dived for the lead but span, hit Keane and the pair slid down the order. Eves, who had been distanced, gladly took the win.

Hunter McElrea held off Zach Holden to finish second, with Alex Baron recovering from his dramatic race one crash to take fourth.

Kaminsky halted his decline down the order in fifth place, while Manuel Sulaiman rose from 19th on the grid to take sixth place and third in the standings. Bruna Tomaselli was seventh, just ahead of Reece Gold and the impressive Matt Round-Garrido. Keane and Rasmussen were classified 14th and 15th.