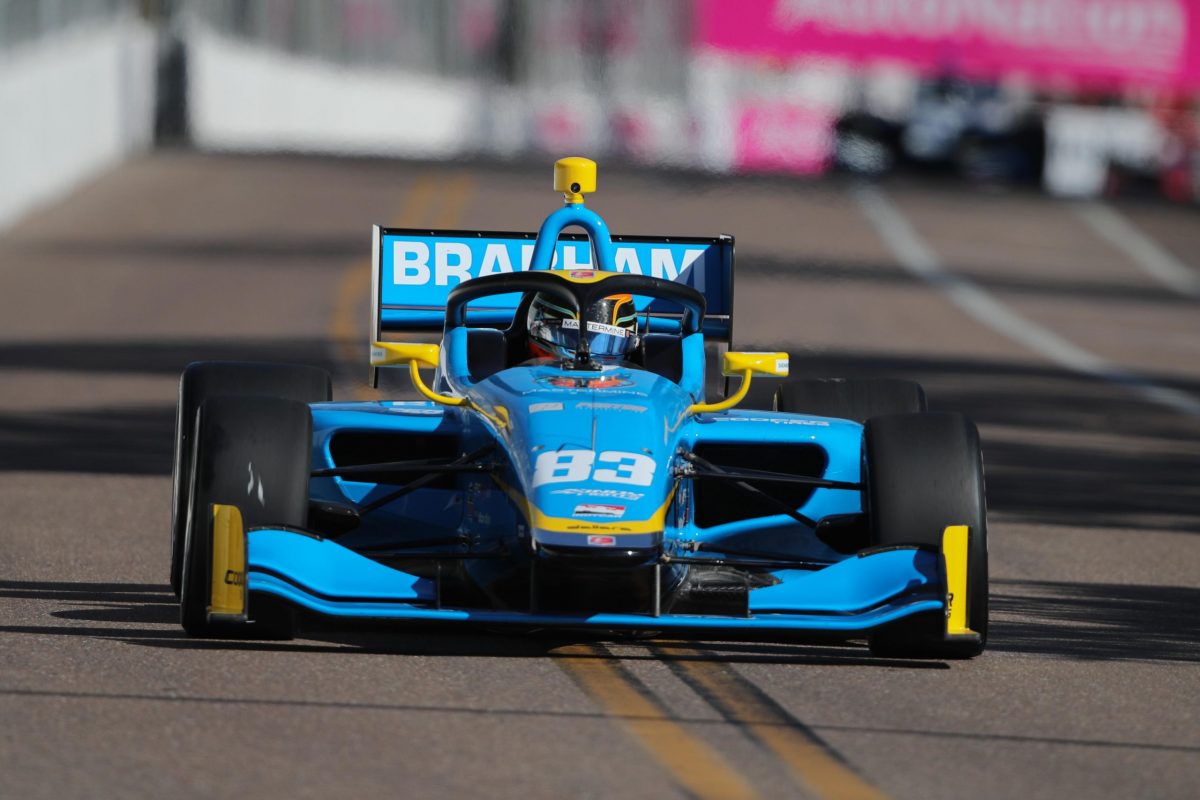 Andretti Autosport’s Matthew Brabham won on his Indy Lights return on the streets of St. Petersburg after team-mates Hunter McElrea and Christian Rasmussen retired while leading.

McElrea led the 45-lap race from pole and built up a healthy lead over reigning Indy Pro 2000 champion Rasmussen, who leapt up to second after Sting Ray Robb forced HMD Motorsports pair Linus Lundqvist (in a co-entry with Dale Coyne Racing) and Benjamin Pedersen (in a co-entry with Global Racing Group) both wide at the first turn.

McElrea had built up a lead of three seconds in the first quarter of the race before crashing out at the final turn, bringing out the first caution period.

The restart came on lap 17, and it was back to yellow flag conditions shortly after as Kyffin Simpson spun fellow debutant Jacob Abel round, leaving the latter stalled and reigning Formula Regional Americas champion Simpson with a flat tyre.

This should have quashed any concerns about having to fuel save in the race, and new leader Rasmussen gradually opened up a gap to team-mate Brabham in the final half of the race.

He was helped by Brabham brushing the wall shortly after the halfway mark, and an inadequate second restart from Brabham.

Rasmussen was more than two seconds up the road and looked to win on his debut until he stopped with two laps to go, citing having no fuel. The heartbreak handed Brabham his first Lights win since 2014.

Pedersen inherited second but was some way off of the leading Andretti pace, while Lundqvist took third. Robb, meanwhile, pressured Lundqvist throughout and took his best Lights result with fourth.

HMD’s Danial Frost had a somewhat lonely run to fifth ahead of team-mate Manuel Sulaiman, who had a quiet race.

The debuting combination of Force Indy and Ernie Francis Jr came from the back to finishing seventh, leading Abel Motorsports’ Antonio Serravalle who held off HMD Christian Bogle in the closing stages.

Serravalle’s team-mate Jacob Abel took 10th ahead of another all-rookie combination in TJ Speed’s Simpson, who finished a lap down.

His team-mate James Roe Jr crashed twice (while being able to recover on both occasions) before retiring in the race’s second half and was classified behind Rasmussen.