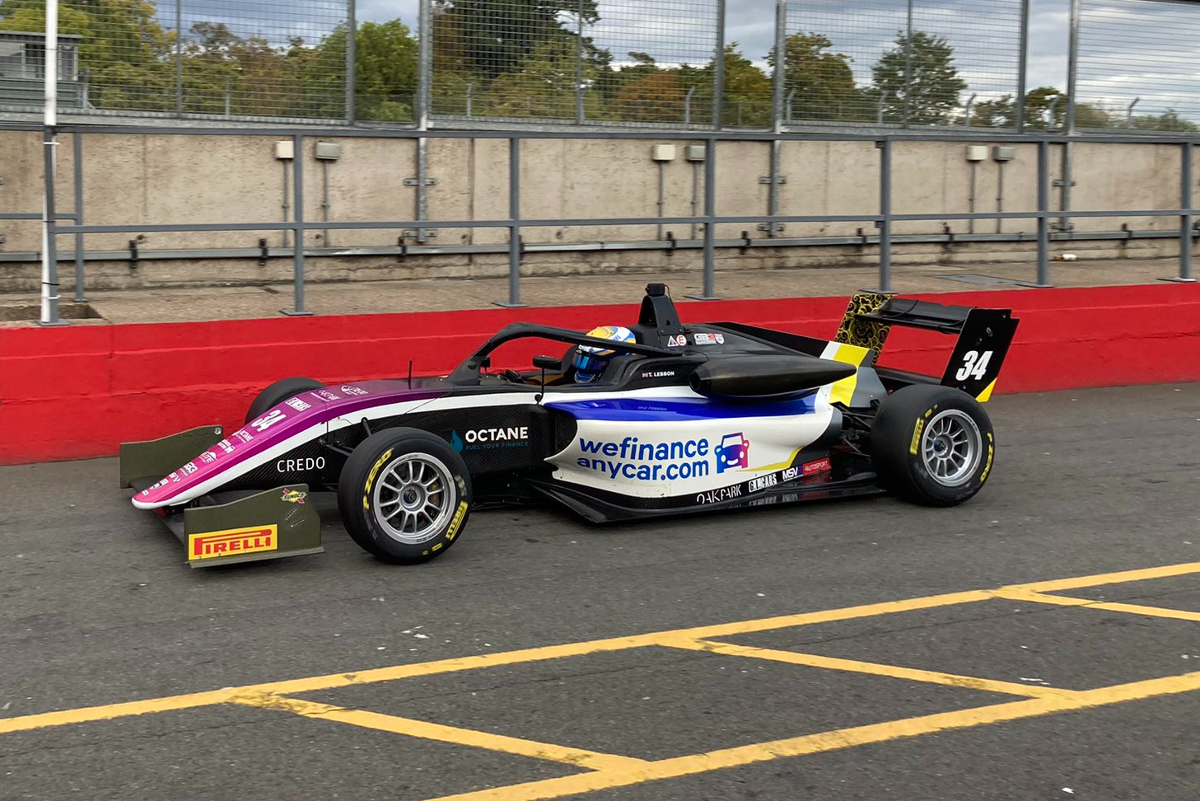 Elite Motorsport’s John Bennett was quickest in GB3’s pre-event test at Donington Park, with the title being decided at the circuit this weekend.

Bennett set a 1m23.036s laptime during the first day of test action on Thursday, with nobody able to lap quicker than him during Friday’s two sessions.

The first came after Arden’s Nico Christodoulou ended up on the grass at the Craner Curves, with Carlin’s Callum Voisin then bringing the session to a premature end by sliding off the road at Redgate.

Laptimes improved considerably in a dry and sunny session two, with Chris Dittmann Racing’s Zak Taylor posting a 1m23.625s approaching the halfway mark to lead the way. Voisin lowered the benchmark by 0.1s with five minutes remaining, but his time was soon beaten by Browning, Hedley and Bennett, who ended up best of all. Voisin responded to finish second fastest, 0.171s behind Bennett.

Taylor led the way in a slightly slower final session of the day before Browning moved to the top in the final couple of minutes of running. But he was beaten first by title rival Joel Granfors and seconds later by Christodoulou, who recorded a 1m23.491s to finish quickest.

Browning topped a disrupted opening session on Friday with a 1m24.117s lap, and Carlin’s Roberto Faria caused one of two red flag stoppages by sliding into the gravel at Old Hairpin.

CDR’s McKenzy Cresswell brought out the red flags halfway through the final session with an off at Old Hairpin, with Christodoulou quickest with a 1m 23.741s. Elite’s Tom Lebbon (pictured above) set a 1m23.643s late on to finish ahead of Browning and Voisin, who both set an identical time.

Recently-crowned Formula Nordic champion Philip Victorsson tested with Fortec Motorsports on both days, and Brazilian Formula 4 driver Lucas Staico ran with CDR, but both are not taking part this weekend.

Marcos Flack and Branden Lee Oxley are also not competing at the finale, with the grid expected to total 21 cars.

Fresh from finishing runner-up in the Ginetta Junior championship, Elite’s Will Macintyre was straight on the pace in GB4 testing ahead of his single-seater debut this weekend.

Macintyre set a 1m31.430s in drying conditions to head Fortec’s points leader Nikolas Taylor by 0.244s in Thursday’s opening session, his first in the car. Kevin Mills Racing’s Jarrod Waberski was third ahead of racing returnee Oliver Clarke, who was the quickest of the Hillspeed runners.

Tom Mills led session two until KMR team-mate Waberski edged ahead by 0.006s late on, but it was Macintyre who was fastest again with a 1m29.571s. Waberski led Mills in session three with a 1m30.008s, with Macintyre and Taylor not far behind.

The GB4 field grew to 15 cars on Friday, with Valour Racing running a car for karting graduate Branden Templeton, who is not expected to race at the weekend.

Chloe Grant caused an early red flag in the morning session after going in the gravel at the Fogarty Esses. Mills set the pace once action resumed but was beaten in the closing minutes by Taylor, who set a best lap of 1m29.993s. Macintyre snatched second before Rossoverde Racing’s Christian Lester brought things to an early end with an off at Coppice.

Macintyre beat his own benchmark from Thursday in the final session, but Waberski set a 1m29.352s with five minutes remaining to top testing by 0.040s. All drivers set their best times of the week so far, except for Hillspeed’s Megan Gilkes and Lester, who both registered their best efforts on Thursday.