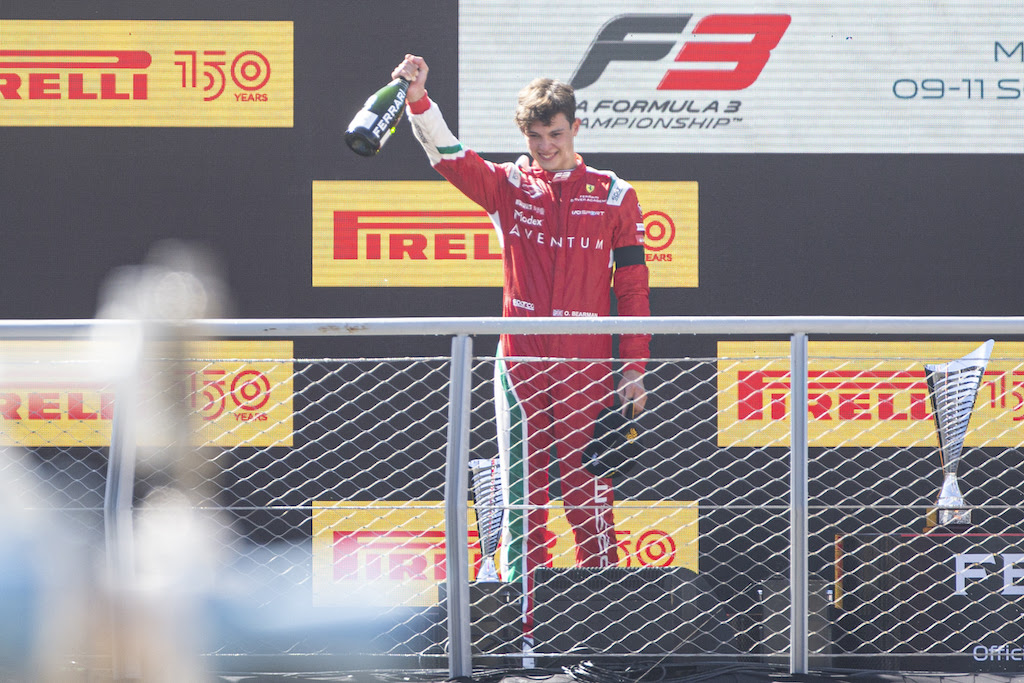 Ollie Bearman was one of several drivers who left Monza disappointed after missing out on the FIA Formula 3 title, but full of positivity about his end-of-season form.

The 17-year-old rookie came third in the standings, making him the highest placed Prema driver. He won the Spa-Francorchamps sprint race, and made the feature race podium five times to make himself a title contender.

The Ferrari Driver Academy recruit spoke to Formula Scout at Monza after the last race and reflected about what has been a “positive” season for him.

“I knew we had a really strong car. I didn’t manage to maximise it every time, but most times I think I did a pretty solid effort,” Bearman said.

“I knew of course that with the car we had we would always be fighting at the front and it was just from my side to put the results in, and I think especially in the second half of the season I’ve done a pretty good job on that. It has put us right up there, not quite enough, but that’s sometimes how it goes.”

At Monza, Bearman said his car was “amazing” and “I was just able to push like hell and have mega pace, and no drop-off”, which resulted in some impressive moves including a late-braking double overtake on Jonny Edgar and Caio Collet at turn one which he again put down to his car’s performance advantage.

“I saw the gap, and I went for it. But no risk,” he said in the post-race press conference.

“I think I probably braked later than my qualifying lap. I just left loads of room on the inside because there was three cars. It was tight but we managed to all get through. It was the car, to be honest, that wasn’t really me. It was just the car was so good at braking compared to the others, I was always gaining 20-30 metres on braking. So it wasn’t really an amazing thing I was doing, it was just the car was too good.”

Two of Bearman’s eight podiums, from 18 races, came in the final weekend and left him just eight points short of the title. The Briton reflected on the situations that didn’t turn out well and ultimately stopped him from becoming champion.

“Obviously, there’s been a lot of moments where I’ve lost out on points, so I’ll be looking back at that and not making those mistakes again whatever I race next year,” he said to Formula Scout, giving no hints on whether he would remain in F3 or step up to Formula 2 for 2023 while confirming his absence from F3’s post-season testing.

“That’s really my goal to not make those silly mistakes like in Imola, like in Zandvoort. I think [bad qualifying at] Zandvoort was less my mistake, but still the same type of thing.

“Overall it was a positive season. I had really strong pace. Let’s look at the positives and be happy about that.”